Completely neglecting Paul Ferrill’s tutorial, I played a bit with PyMaemo to create an application which allows to record waypoints easily using the N810.

Until last summer, I mapped using a Garmin GPSMap60Cx. When I saw a POI or wanted to record a street’s name, I just pressed its waypoint button and talked to my music player weird stuff like »Waypoint 123, postbox on the right hand side in blah street«. You get used to the bypassers who keep an eye on this obviously mentally disturbed cyclist who tells weird things to his right hand (I guess they don’t notice the recording device in my hand).

During the winter months, I used osm2go excessively for mapping, but mainly by foot. It is, however, not suitable for mapping during cycling tours. As the 2009 cycling season just started, I mounted both the N810 (for navigation purposes) and the Garmin GPSr (for recording waypoints) on my handlebar. A bit too much for my taste, not to mention the music player I additionally carry around. So what I wanted to achieve is to do the waypoint recording completely with the N810, omitting the Garmin device.

I didn’t use Python before and had no time to read about it. So I ended in some googling around and stuffing the resulting PyMaemo snippets in an ugly script. Though I was surprised how easy it was to create and run an app, it was not possible to achieve other goals with a few lines of code. But anyway, I have a basic application which can save a waypoint with a name and a comment to a simple CSV file: 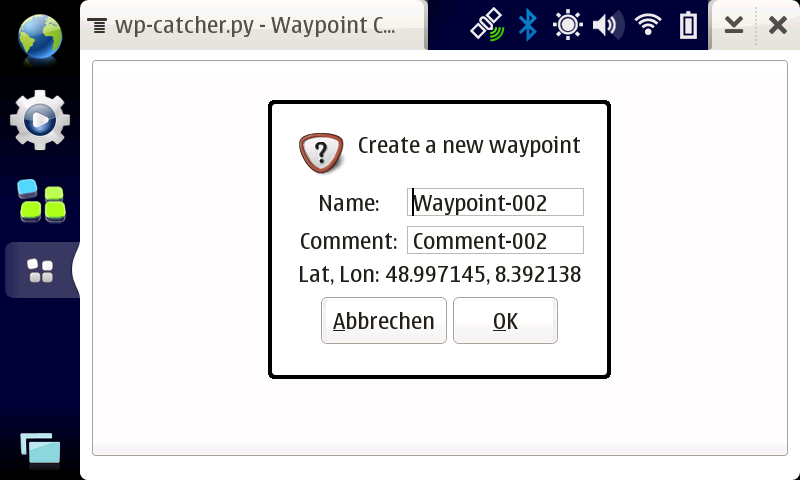 Though the application is usable (and will be tested tomorrow), the following things are still missing:

Despite this “enormous” TODO-list, I’m very pleased with today’s results. Tomorrow I will leave the Garmin alone and use the N810 only for mapping. Goal achieved :) .