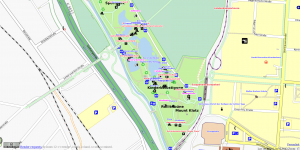 I managed to extract the lost mapping data from an osm file dating back to december of 2008. I intended to resurrect the previously deleted objects to preserve their history rather than uploading them as newly created objects. But it turned out that this cannot be accomplished easily.

I first added the attribute action='modify' to the objects by manually modifying the osm file. Then I loaded the file into JOSM and tried to upload it. Unfortunately this failed: JOSM reported a mismatch of the versions of the objects, which was foreseeable. It offered to sync them with the server, but to no avail. It insisted to create the items as new ones instead of undeleting the former ones.

So I needed some help of a guy who is known to host several mysterious Perl scripts to add, update and delete osm data on the server directly. I sent him a list of the IDs to restore and he did the hard job. Thanks a bunch to Frederik Ramm.

So last year’s data is up and running again. During the next days I have to check its correctness on-site using the N810 and osm2go. Not that bad, as there’s music, beer and I usually meet friends :) .