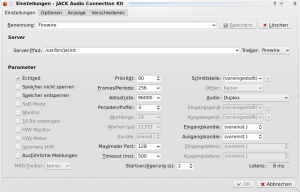 Meanwhile I got the Phonic Helixboard Universal PHHB24U mixer connected to my Ubuntu Jaunty Jackalope powered Dell Precision M 4300 notebook via IEEE 1394 (aka firewire). The basic setup is simple for an experienced Linux user, but not straightforward for an average computer user. So here are some hints what to do to get such a device up and running.

Note: all the following commands need to be entered into a terminal window. This guide will not cover the usage of alternative graphical user interface applications. If you use the subsequently listed commands, do it at your own risk and responsibility. Some of them change settings of your operating system, possibly breaking your system and thus requiring a reinstallation if something goes wrong.

Most professional musicians (and the so called “prosumers”) use jack, the low latency realtime soundserver, and so do I. Jaunty gets shipped with jackd 0.116.1 which is sufficient for driving the Helixboard via firewire.

However, the shipped version of the ffado firewire audio driver is not. So the first step is to download, compile and install this package manually. If you fail with this task, you do not need to further continue.

First we will try to pull in some development files necessary to compile the ffado driver by typing apt-get build-dep libffado0 Then ensure to uninstall any existing version of ffado by typing sudo apt-get remove libffado0 libffado-dev.

Download the latest package from ffado.org. At the moment of this writing, the current package was FFADO 2.0 Release Candidate 2 (1.999.42). Unpack it to a temporary directory. Build it by typing scons && scons install in a terminal window in the source directory. Keep both the compiled code and the downloaded archive on your hard drive for possible later modifications.

The next step is to grant realtime permissions to the audio group via PAM. The audio group needs to be added to (respectively modified in) the file /etc/security/limits.conf. I use vi to edit this file. You may want to use any other editor. Please note that, in either case, you’ll need root privileges to edit this file. Ensure it contains some lines like the following ones:
@audio - rtprio 99
@audio - memlock 250000
@audio - nice -10

Log out and in again the changes to take affect.

Now connect the mixer to the notebook using a firewire cable. Udev creates a device file called raw1394 in the /dev/ directory dynamically, which you can check by typing ls -l /dev/raw1394. The device file belongs to both the user and the group root, so it is likely that you are not allowed to access the device. The temporary fix (until the next reboot) is to change the group permissions of this file by typing sudo chown root:audio /dev/raw1394. Now the file should be readable and writable for anyone belonging to the audio group. The persistent fix is to create an udev rule file by typing sudo touch /etc/udev/rules.d/50-udev-firewire.rules. Edit this file and add the lines KERNEL=="raw1394", GROUP="audio" to it.

As a graphical frontend for jackd, I recommend QJackControl. Type apt-get install qjackctl to install it.

If you have been successful, everything now should be prepared. Configure QJackControl as seen in the screenshot above this posting. Then hold your breath and press the Start button in the main window of QJackControl. If everything is setup right now, it should start jackd without any complaint. Congratulations!

Though Linux distributions are easy to use nowadays, there are still occasions where it’s still not that easy to get stuff done. I hope this posting helps some of you to get your equipment up and running on your Linux box.

2 thoughts on “Running a Firewire Audio Device on Linux”