The presets in JOSM are built at runtime parsing an XML file. JOSM gets shipped with one default file which I usually maintain. Users beg for the inclusion of further features regularly, so meanwhile the menus as well as the dialogs are both densely populated. This makes JOSM hard to use on devices with smaller displays, like the popular Netbooks or internet tablets.

For usability reasons, I objected for a very long time to introduce a further hierarchy to the menus. I have observed computer users towing the mouse through such menus, and it was neither much fun for the users nor for the observer. These days, however, I finally gave up. If you use the SVN code or download josm-latest.jar, you can try out the new submenus: 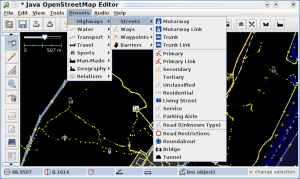 For easier access, users can also add such presets to the toolbar via the preferences dialog: 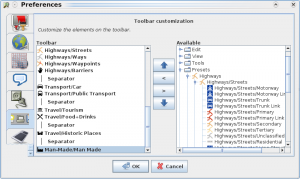 The disadvantage is that most users might not know about this feature respectively might not use it anyway. On request, I have now added some default presets to the toolbar: 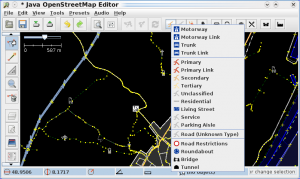 Thanks a bunch BTW to Dirk Stöcker, the current maintainer of JOSM, who did the hard work “behind the scenes”. I hope the JOSM users like it. As such changes tend to trigger controversial discussions, I’m prepared for all kinds of (Kraut-)bashing, though. Did I mention I actually had kraut for supper :) ?

1 thought on “Subgroups in JOSM presets”