A Hoverfly watching me and the bugs

Today I was tricked by my own lazyness. I have two batteries for the N810. Each of them usually lasts for up to 4 hours while being mapping. I am used to charge them immediately when I return from a mapping tour. Seems I messed it up after the last tour. As the first one was drained, I put the second one into the device – and it immediately complained that the battery was low!

This happened as I was somewhere in the fields of northern Alsace, so I was a bit unoriented. The sun was hidden by some dark clouds, so it was difficult to determine the right direction. This was the first time I thought that paper maps have advantages. They have neither a display that can break nor a battery that can drain. Of course it was not that difficult to find the right way to Wissembourg, but I had no chance to go the preplanned route. Here’s the track:

At the marker, I have been attacked by dozens of ladybugs. Frankly, I have never seen that many of those bugs in my life. They covered all of my clothes and the rest of the body. They even bit me. I’d like to know if those masses had to do with the maize found in the fields around. Here are some pics (which are not public domain BTW). Two shots of ladybugs occupying my forearm: 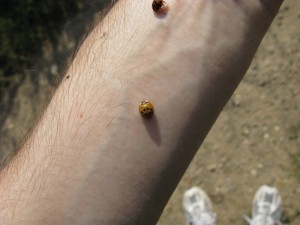 Ladybugs on the forearm 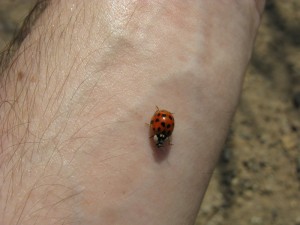 Ladybug on the forearm

They even liked the black clothing: 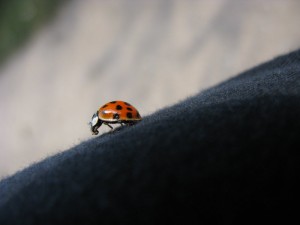 Ladybug on the clothing

One pretended to be dead, so I had the occasion to take a shot from the bottom side: 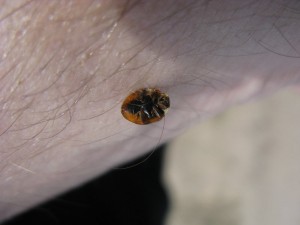 And a hoverfly was prying, so I could shot it as well. See the top most image of this page.

As it began to rain in Wissembourg, I took the train back to Karlsruhe. All in all a nice late summer mapping tour with a nice catch of new graveled tracks for openstreetmap.