Most synthesizers follow a similar approach. There’s one (most often two or three) oscillators which generate the base sound. This sound then passes a filter to filter out the unwanted harmonics. Finally, the sound gets out of the synth and is fed into an amplifier and the speakers.

Actually, it’s much more complex, but basically, that’s it. Most synthesizers provide at least the following four base waveforms: 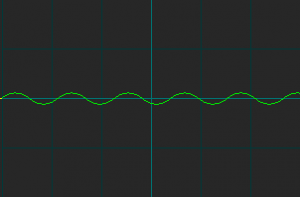 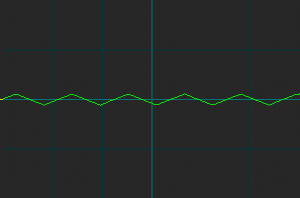 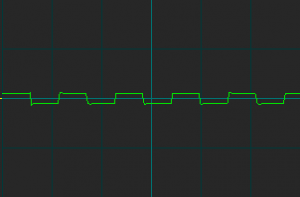 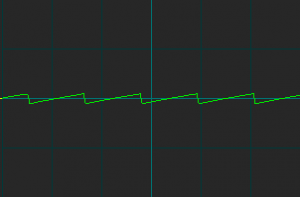 The sinewave is a waveform which contains no partial tones at all, thus being a “boring” waveform. It is more or less senseless to filter it, as there are no partials to filter out.

The triangle wave is very similar to the sine wave, providing a couple of partials only. You can filter it, but there will be no dramatic changes in the sound.

A square wave contains all odd partials, and the sawtooth contains all partial tones. The latter two can be filtered to achieve sound changes. Sine and triangle waves are mainly used to phatten the sound or to do some interesting modulations.

Square waves often can be modulated to change their pulse width while the sound is being played.

Because the oscillators provide the base audio material, the synth manufacturers care a lot about the “right” waveforms. Thus the waveforms slightly differ from synth to synth. The above examples have been recorded using a Korg Z1 synthesizer, which gave me the “nicest” oscillator images. On other synths, like the Waldorf microQ, the waveforms have less sharp edges, resulting in a different sound base.

Oscillators can have much more features like additional waveforms, samples, sync, frequency and cross modulation or additive synthesis. But anyway, many sounds are just built using a sawtooth or a pulsewave.