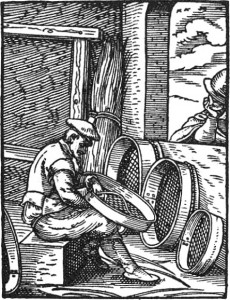 I’ve posted about base synthesizer waveforms yesterday. The signal from the oszillator(s) most often gets used to feed a filter. Almost all synths at least provide a lowpass filter. Some synths provide a multimode filter, which may contain lowpass filters in different characteristics, a highpass filter, a bandpass filter, a notch filter and maybe a comb filter. Those filters are not static. Instead one can change the cutoff frequency of the filter, which effectively means that the range of filtered partials can be influenced.

The lowpass filter is the most commonly used filter. It cuts all partials above a certain freqency, resulting in a less brilliant sound. Applied to a sawtooth wave, which contains almost all partials, the result is a dramatically changed sound. In the following example, the filter first is completely open. Then it slowly closes until no frequencies are left at all. Then it opens again:

A Sawtooth wave filtered by a lowpass filter

Sawtooth filtered by a lowpass filter with resonance applied

Most synths allow the musician to automate the filter cutoff by some envelope. In the filter section, there’s a parameter called »Envelope Amount« or similar. In this example, first the filter gets set up. Then the envelope gets adjusted to achieve a pad like sound. Here we go:

That’s still boring and theoretical stuff, as a lot of spices are still missing. But anyway filters driven by envelopes are key features of synthesizers.