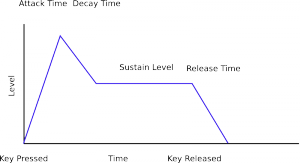 One of the most essential modulators found in synthesizers are envelopes. Most synths at least provide two envelopes – one for the amplifier, one for the filter. Both allow to apply a contour to the sound, the first one to the volume, the latter one to the spectrum of partials.

The most basic type of an envelope is the ADSR envelope. The four characters stand for Attack time, Decay time, Sustain level and Release time. The above figure should give you a glue what this is all about. The envelope gets triggered as soon a key is pressed. After that, it raises to the maximum level, and falls down in the decay time until it reaches the sustain level. This level gets held until you release the key. After releasing the key, the envelope falls down to zero during release time.

For solo sounds, both the attack and release times usually are set to small values, so the musician only needs to adjust the decay time and sustain level to her likings. You can hear an ADSR envelope applied to a lowpass filter on the previous post.