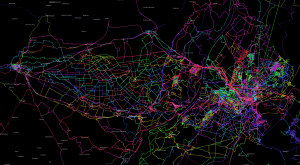 Mapping Traces of the Karlsruhe area

Back in 2006 I bought a new bike to get some physical training to compensate the work and computer sitting motionlessness. I also bought a Garmin eTrex Venture Cx GPSr together with the City Navigator map material for routing. The device was about 300€ and the maps about 200€.

Though the device offered a bike routing algorithm, it did a very poor job as the data just didn’t contain ways reasonable for biking. I searched for other maps, especially for the region along the german-french border, but to no avail.
I first considered to create my own maps, but I knew this was futile. I realized that other people must have had the same problem and there surely was some interesting project out in the world wild web – bulls eye!

I monitored the activity of openstreetmap for a while, as I didn’t want to waste my time mapping for a project which has no future. It seemed to be healthy, though I didn’t understand yet how the project was organized, paid and controlled.

I thus decided to contribute to the project. Karlsruhe and the area around it was complete whitespace, except for some fragments of the motorways. I mapped huge portions of the Karlsruhe City between August and December of 2006, before Fred and Jochen joined the team.

I never intended to map Karlsruhe completely. I always hoped that others would join and help doing the hard work. On the other hand, I really enjoyed it. I live in Karlsruhe since 2000, and cycling through all the streets led me to places I would have never seen otherwise. So it was not just altruistic work. It was an excellent occasion to combine some afterwork physical activity with knowing your hometown better and collecting data for a cool project.

As Karlsruhe (right center on the image) was more or less completed a while after the Mapping Party in Spring of 2007, I started to do what I originally intended: Cycling, preferably outside of residential areas. So I did. Some trips headed south, but most trips I did headed west. First crossing the river Rhine. I mapped some palatinate and french villages there, but also cruised a huge forest called the »Bienwald« until I reached Wissembourg (leftmost on the image), which I mapped as well :) .

Today I compiled some of the traces I collected during the last three years and created the above rendering thanks to some specialized tools. Frankly, that’s pure pr0n. This is the command used to create the image:
python ./render.py -d ./ -r 42 -s 2880 --pos=49.0,8.2

After that, I created individual images for each track, cropped the transparent borders and stuffed it into an animated GIF:

Here are the commands I used for cropping and for creating the animated image. Convert is part of the famous ImageMagick package:
for i in *.png; do convert "$i" -crop 766x420+1+170 cropped$i; done
convert -delay 30 *.png TracesAnimated.gif