I’ve posted about ADSR envelopes earlier. You will find them in most synths. However, some synths provide further waveforms. As a monophonic solo synthesizer, the Minimoog provided no release portion. This results in a simpler ADS envelope: 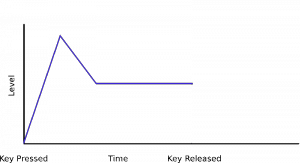 The Access Virus C provides an additional time parameter for the amp envelope (hidden in the sound edit menu). This way, the volume can rise or fall during sustain time:

The Waldorf Microwave I provides a third envelope with eight times and levels. Its main purpose is to traverse the wavetables¹, but it can be used for many other parameters as well. Though it might look complicated, it’s usage is simple. Each segment has two parameters, its time and end level. Additionally, a loop start and key off point can be set. The portion between both is looped as long as the key is held. I’ve designed lots of interesting sounds using this envelope: 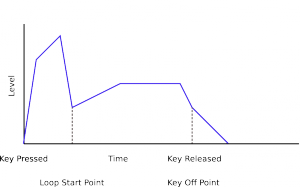 The Waldorf Q synthesizer series (e.g. the microQ) provide, besides the ADSR envelope, four further types. The most difficult to configure envelopes I have ever used are the ones in the Korg Z1. Its five envelopes provide 5 segments, controlled by nine parameters. That’s not a problem yet, but read on :) .

Consider a filter and its cutoff frequency. The filter envelope will have no effect unless you set the filter’s envelope amount parameter to some useful value. After doing so, the envelope will “open and close” the filter while you hold down a key.

Amplifier envelopes only make sense with a positive amount, as there isn’t a negative volume. However, when you use the envelopes to control other paramters (such as the filter cutoff frequency or the pitch of an oscillator), you can invert the direction. For this reason, the envelope amount parameters usually are bipolar, providing negative amounts in their values.

This still is a simple but powerful concept. Things will become more difficult if your envelopes are more complex (as on the Z1), because you may want that the velocity not only leads to more elongation, but also influences the values and times of individual points of the envelope.