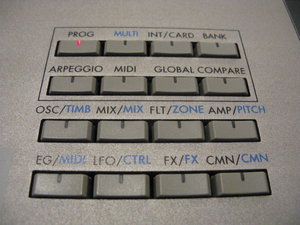 I’ve collected a lot of sounds for the Z1 from several web pages. All those sounds now need some sorting and rearrangement. After that, I’ll send them to the Z1, extract the best ones and refine them to my likings.

The Z1 offers 256 internal slots for single sounds (called programs), arranged in two banks, A and B. Inserting a PC card, it can make two more banks directly accessible via a dedicated button.

The card provides much more space (4MB in total), and can host up to 15 so called card areas. Each card area hosts two banks. A card area switch hidden in the global menu lets the user define which of the 15 card areas is accessible directly from the synths front panel. This means that 512 sound programs are directly accessible (256 internal, one card area), while the card can host 3584 further sounds (14 remaining banks).
This means it is possible to have up to 4096 sounds available in the synth.

That’s not a minus at all. It’s simply impracticable to search such a huge amount of sounds for a particular one. Instead one wants to use some software tools to manage the growing sound collection.

However, searching such a huge amount of sounds from the Z1’s front panel is painful. To manage a collection of 2,000 sounds, usually a piece of software gets used. Such tools most often not only allow to rearrange sounds, but also to edit them and to tweak other settings. So I searched the web and found some tools:

3 thoughts on “Sound Collection Tools for the Korg Z1 Synthesizer”