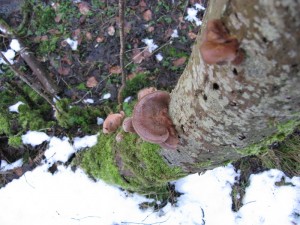 Due to the annual Xmas family meeting I had the occasion to do some further mapping of the lovely Ottertal. Unfortunately my camera failed after I had taken four pictures, but that’s better than nothing :) .

There are two abandoned barnyards. The Otterhof was left at the end of the 19th century (if I remember correctly). The complete area has been reforested in the mid of the 20th century (1959?), but there are remains like some foundation walls, a vault cellar and a well, covered by a stone plate. During the summer months, it might be difficult to visit it due to the weeds.

Around the Gickelhof, which was abandoned in the mid of the last century (1959 as well?), there is still some farmland. In the valley, there are remains of a hydraulic ram which was used to pump up water to the Gickelhof. Of course it is not operational nowadays, but the water is still coming in with some pressure and leaving the building. The ice indicates some spraying water. As it was relatively dark, I haven’t taken a picture of the actual machine inside yet: 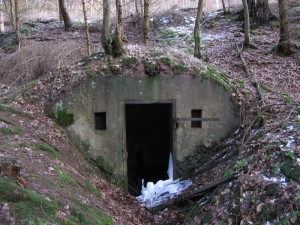 The water is not withdrawn from the Otterbach but from a fountain north of it (a conduit is crossing the stream). I mapped the pipes as waterway=canal tunnel=yes. If there are more suitable tags please drop me a line. Unlike the drive pipe, the courses of the underground supply and delivery pipes are just estimated and need remapping. The water of the supply pipe gets collected a couple of meters above the ram building (built 1902/1903?) and enters the drive pipe which goes down straigth to the building containing the ram:

The ram works like a variable frequency oscillator. Some (read as most) of the incoming water gets lost to operate the machine. It passes the clack valve which subsequently gets closed by the flowing water. At the very moment it closes, the delivery check valve gets opened by the pressure and some water gets pressed uphill to the delivery pipe. After a short moment the delivery check valve closes, the clack valve opens and the process starts anew. One cycle takes 1 or two seconds, which results in a frequency of 0.5 or 1 Hz. The pressure vessel containing some air is not necessary for the ram to work, but gains its efficiency and lifetime considerably.

Together with my siblings I went down the Otterbach, so we now have parts of it in the openstreetmap database as well. As a lot of ways, paths and other details of the area are still missing, and I plan to take pictures of the water source, the supply pipe, the actual machine inside the building and the covered reservoir at the end of the delivery pipe at the Gickelhof, the next trip will follow rather sooner than later :) .

BTW: I found four historic maps of the area which contain both the Otterhof and the Gickelhof. Very interesting material.