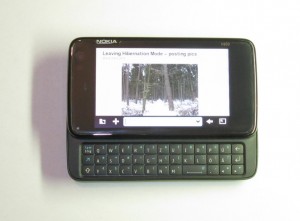 I never owned a cell phone. I never wanted one. At least not for private purposes. Admittedly there were occasions when it was useful to have one available. But there were enough reasons not to buy one.

I rarely use a telephone. At the office? Of course. I couldn’t do my job without it. At home? There’s electronic mail, there’s instant messaging, there’s IRC, there are mailing lists, there are (hmpf) bulletin boards. Phone? Well, it is useful once a decade when I call some relatives.

Due to the fact that I rarely need a phone, a hand set was way too expensive. SMS also is rather expensive compared to the ridiculously wee small amount of data that gets transmitted. Plus most phones I’ve seen are rather ugly, the user interface design seldom is well engineered and the branding of the operators does the rest.

The iPhone was very close. A well done piece of hardware, plus both an excellent operating system and user interface. But is’t a closed ecosystem, making it hard to write your own software for the device. I’m a technician. My understanding of such a device is that it at first is a computer. And a computer is a machine which I want to do what I want it to. At least when I bought the hardware.

I use an N810 for some time now. I used it as a PDA, but mainly for mapping purposes. It only provides WIFI, but no cellular connectivity. The advantage of the device is its almost complete openness. It’s powered by a Debian like Linux system called Maemo. Nokia built several tools, software and infrastructure around the device, open for anyone. The perfect companion for a software developer.

Consider such a machine which coincidentally provides the additional capability of cellular connectivity. A completely open mobile Linux computer, where you can use any networking software as if you were sitting in front of your desktop computer. Some call this ubiquitous computing.