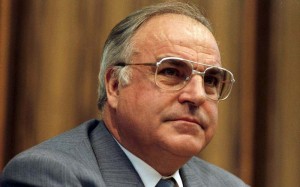 Helmut Kohl, former chancellor of Germany, today is celebrating his 80. birthday. Due to his »eternal« tenure of 16 years, I didn’t know of any other chancellor during my youth.

He had a huge impact on the european as well as the german unification. On the other hand, he »abused« the german reunion just to maintain the power of himself and the Christian Democratic Union party. Plus, unlike his own point of view, the german reunion was mainly driven by the inhabitants of the former Deutsche Demokratische Republik.

He failed miserably to do his homework concerning domestic policy. His predecessor, Helmut Schmidt, already realized that the demographic change requires to reform social legislation, but instead of doing his duty he deprived progressive people (like Rita Süssmuth) of power. After the lost election in 1998, illegal donations became public. Until today, he refuses to clarify the circumstances. I remember him as a quite self-satisfied person who prefers to solve a certain class of problems just by letting the time pass by (»aussitzen«).

I wish him health and luck, a nice birthday party and of course lots of Palatine Saumagen :) .