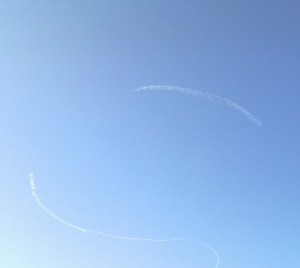 Plane drawing curves on the sky

Again I was mapping using the N900. I permanently had Mapper, osm2go, FM Radio (respectively an audio player) plus a text editor running. Additionally I took a couple of photos. 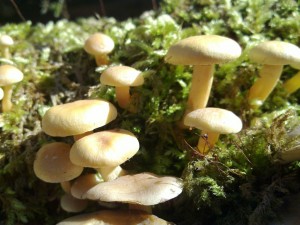 Some fungi catched with the N900's camera

Again I’m quite impressed by the quality of the device’s camera. The only thing I miss is a manual focus. Which IMO is a problem of luxury.

The fully charged battery powered the device for 3 hours. The N810 was capable to last up to four hours, but a comparison is invalid. The N810 did not provide cellular connectivity, I never used it to play audio and I seldom used it as a camera. Plus the battery capacity of the N900 (BL-5J, 1320mAh@3.7V) is almost one sixth less than the one of the N810 (BP-4L, 1500mAh@3.7V).

Additionally I was again trapped by “the big bug“, which I assume has an impact on the battery. I really hope this bug can be solved rather sooner than later.

All in all I think the power management of the N900 is excellent. If you think 3 hours is very poor, just use the N900 like an iPhone: Avoid multitasking whenever possible :) .

For the N810 I bought (and used) a second battery for mapping trips. I just ordered one for the N900 as well. If necessary I’ll order a third one, which will be surely enough even for all-day mapping trips.

2 thoughts on “Battery Lifetime when mapping with the N900”