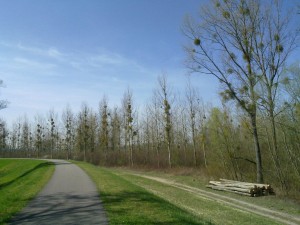 The cold and dark winter months finally are over. At the Rhine, the temperature was about 22°C today. A warm and sunny day combined with a light northern wind. A perfect day to open the biking season.

Assuming the sun was not that strong yet I decided to avoid the woods and better cycle in direct sunlight. According to my mirror, this was a big fault. Red Hat is a Linux distributor, and Red Head is a Linux user :) .

I crossed the Rhine using the ferry near Neuburg and went down to Seltz. There was an almost 50 year old ferry until 2005, crossing the Rhine to Plittersdorf. It was a special construction, which was powered by the water flowing down the Rhine. In 2005, it has been rammed by a ship and never been restored. First there were rumors that there will be no replacement, as there is a bridge nearby, connecting Wintersdorf and Beinheim. The more I was surprised that there is some ongoing work to build a new construction: 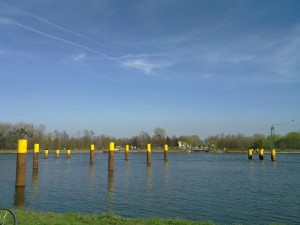 From an economical POV, the ferry is unnecessary. Nevertheless, it helps to bring french and german people together. If you think that this is useless, consider that the german and french inhabitants share a long history, including many wars. Both Germany and France are the main protagonists of the european union, and germany pays a huge amount of money to make it a success. The new ferry will mainly be used by pedestrian and biking tourists – which is a good thing to cultivate friendships and to visit cultural events on both sides of the Rhine.

The delta of the Sauer a bit upwards is a quite interesting ecosystem. Here are two photos of the last segment of the Sauer, before it enters the Rhine (which can be seen in the background of the first image): 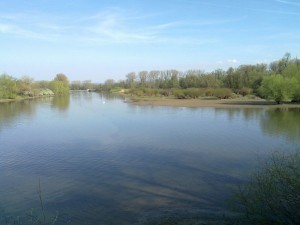 This photo shows the other side of the bridge near Munchhausen: 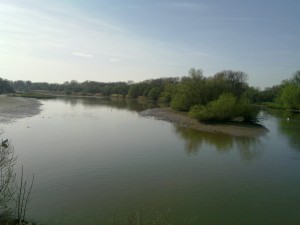 All kinds of birds are busy copulating and nest building. Detect two storks in the image below: 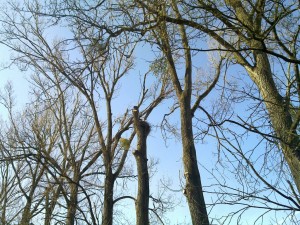 I mapped several tracks accompanying the Rhine, to make the osm data more complete. Those are not important for routing, but at OSM we are proud of the level of detail we can provide.

I really enjoyed the trip. It’s been a while since I’ve last been there, and due to a bug in the code of my very own software I wasn’t able to map all details. Seems I need a further trip to collect the missing data :) .