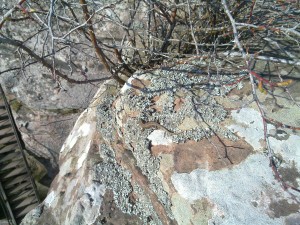 Lizard on the Loewenstein

When I took the above picture, I missed the zoom lens of a dedicated camera. It was not possible to get closer to the lizard, as it otherwise would have escaped. Of course noone would ever request a cell phone to provide an objective slot :) .

The images have been taken during a mapping trip near the Gimbelhof, a hamlet in the woods near Lembach. I’ve visited three ruins of medieval castles:

Nearby you’ll find two further ruins, the Frœnsbourg and the Fleckenstein. The latter one is a partly reconstructed tourist attraction.

Here’s the Gimbelhof as seen from the Loewenstein. I used the landscape mode of the camera. While the branches in the foreground are captured well, the target itself is rather blurry. What I wanted to achieve is the opposite. Obviously I need to learn how to use the device correctly: 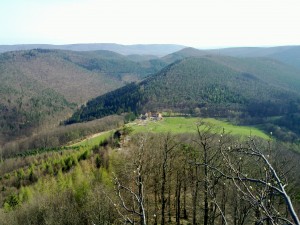 The Gimbelhof as seen from the Loewenstein

Here’s the same problem again, the Fleckenstein as seen from the Hohenbourg, using the landscape mode. Maybe the auto mode would have been more sufficient: 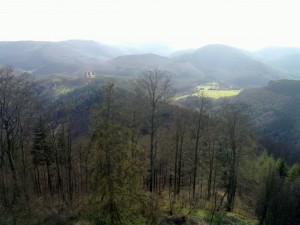 Fleckenstein as seen from Hohenbourg

Here’s a typical fault when taking pictures: Overexposure due to heavy sunlight. The sun was on the left, so the blue sky appears as a white area and the front wall of the Hohenbourg ruins appeares too bright. The right hand parts of the image however appear too dark: 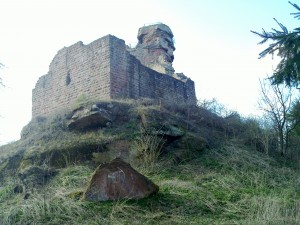 This image is too dark. I should have adjusted the exposure time a bit. Additionally I’m not pleased by the depth of focus and the placement of the target: 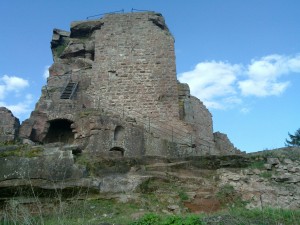 In this image I’m not pleased with the depth of focus at all. While the stones right in front of the camera position and the tower seem to be OK, the stones in the second quarter of the image are rather blurry. I have no clue yet how I can avoid such a result in the future: 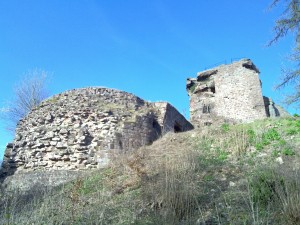 Two further pictures, both showing the Hohenbourg (fr) as seen from the Wegelnburg (de). I tried to circumvent the lack of depth of focus and the overexposure using two techniques, which both didn’t help much. Again I used the landscape mode of the camera. I did focus apart from the target, pressed the camera button halfway down and then moved the camera to the final viewport. Appearantly the camera still has adjusted the exposure time, which was a bit surprising: 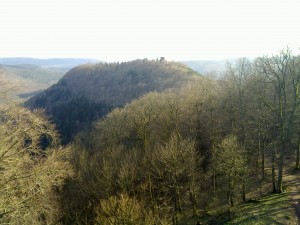 In the second image I included more of the sky area in order to get less overexposure. It didn’t help much: 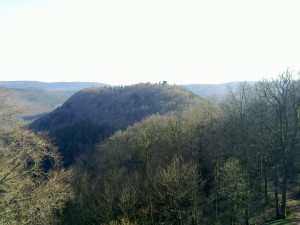 Obviously I’m in need to learn more about the N900’s camera, especially how to cope with depth of focus and exposure times. What I’m missing compared to the Canon cameras I’ve used:

If you think the N900’s camera is crap, judging from what I’ve written above, you’re completely wrong. It’s not exactly fair to compare a built-in camera of a handset to a dedicated camera. If the camera is not good enough for you, just keep on carrying your SLR with you each time you leave home :) .