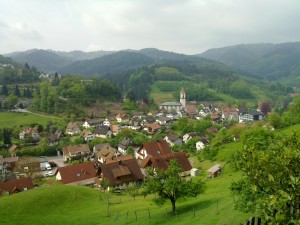 Around Ottenhöfen, a Black Forest town, some ancient watermills have been restored. A hiking trail connects all of them. Today’s weather was not that great, e.g. too cold for May, and it was a cloudy and windy day. We grabbed the occasion anyway, stuffed eleven people into two cars and entered the black forest, leaving the cars at Ottenhöfen station. Here’s one of the watermills: 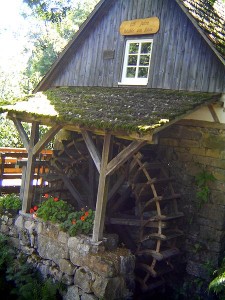 Meanwhile I know why I’ve been elected to book and drive a van of the local car sharing provider. Along the trail, a lot of fountains are sited, and some of them act as a very special selling point (called »Schnapsbrunnen«). The black forest aborigines place bottles of schnapps in the water, add some drinking glasses and an offertory box. Hikers just serve themselves and leave some money. Needless to say that some of us served themselves very well :) .

Of course I used the occasion for some mapping. Most tracks and ways already have been mapped, but not very well. I added some ways, details along them and fixed some broken crossings. I’ve also modelled the water mill trail for appearance in the hiking and bridle map, but it will take some time until it gets rendered.

Finally we had some coffee at a local restaurant, enjoying local cake. This is a typical black forest cherry cake (»Schwarzwälder Kirschtorte«): 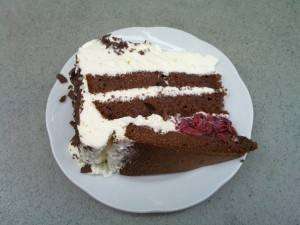 A great trip, and it begun raining just as we returned to the cars. An excellent timing :) .