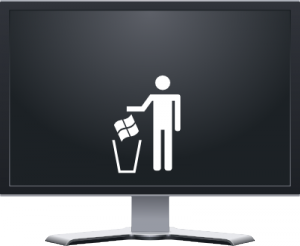 Unintentionally trashing the Vista installation on a Dell computer

One decade back, I was installing operating systems quite often. Win 98 was broken every now and then, and Linux was developing very quickly.

Meanwhile I’m very reluctant in updating operating systems. It just takes too much time to set up the system, to reinstall all required applications and to do all the configuration work. Or the other way around: It’s just a waste of time.

However, there are circumstances where your machines need some healing hands.

This week, a much anticipated update for the Nokia N900 was finally released. I was eagerly waiting for it, as I hoped that it would erase »The Big Bug«. The update was advertised as an »over-the-air«-update, installable via a wireless network connection. Unfortunately, the device didn’t offer the update on my machine. After waiting for a couple of days, I got suspicious and searched the web for the reasons.

Obviously the device performs some checks first, and in case certain circumstances occur, it denies to offer the update. The reason might be that I enabled an additional repository and installed (only) a couple of extra software packages. Further, the N900’s operating system is not installed to the 32GB flash memory. Instead, it lives in some wee small extra partition of about 200MB. I’ve never understood why it is designed this way and why the space is that limited. Unfortunately, the Debian-like operating system stores each package in a folder in this small partition, further reducing its size.

So I ssh’ed into the phone and tried to install the update using apt-get. It told me that it wants to download about 100MB of packages and that there was not enough space left. I created a folder on the 32GB flash drive and symlinked to it. Now the update packages were downloaded and the update went fine – halfways. I saw some warnings during the update, and finally it stopped.

So I did it the hard – by reflashing the device. I downloaded the current firmware image and a GUI tool for the Mac. Unfortunately this tool failed to complete the flashing process so the device was bricked. I tried again using my Linux box and everything went fine now. As all personal data lives on the 32GB storage which was not touched by the flashing process, I just needed to reinstall some additional software packages (mainly those for mapping) and was back in business.

#2: Reinstalling Vista from a recovery CD

The backlight of the display on my Dell notebook was broken (it appeared as a defective contact, as the backlight switched off every now and then). I’ve a service contract and hoped they would replace it as soon as possbile (»next business day«). Surprisingly, there was some (bi-daily) mail exchange where they told me what to do – one bit of information per message.

First they asked me to install some BIOS and driver updates, though I wrote in my initial message that I’m running Linux on the machine and that everything looks like a hardware defect. I wanted to do them the favour and booted Vista from the (seldom used) NTFS partition. After downloading and installing the driver updates, Vista prefered to show a blue screen at each attempt to boot it. Doh.

Dell further asked me to run a diagnostics tool before booting the operating system. This led me nowhere, as the backlight of the display always switched off while the tool was running.

Next they offered to catch the device and to repair it off-site. The device would be unavailable for up to two weeks. Hey guys, there was a reason why I spent the extra bucks for the on-site service.

Finally, after almost two weeks, a technician dropped by and exchanged the display. Heck, I didn’t remember how bright the display once was :) .

I do not really rely on the Vista installation, but I boot it every now and then to compile and test some code of my own. Due to some file system errors, problems with KDE after upgrading Ubuntu, the broken Vista installation and the fact, that the 15 GB partition was too small for Vista (yes, Vista needs at least 10GB for its installation, 2GB for a swap and 2GB for a hibernation file), I decided to set up the complete machine anew.

I backed up my home directory and used the Kubuntu installation disk to repartition the hard drive.

The Vista installation went halfway straightforward thanks to the Dell recovery CD. But later on I got stuck as there was no driver installed for the wireless network adapter. I tried to install it from an additional CD that came with the device, but to no avail. I finally downloaded some drivers from the Dell page and got it working, but this still was a challenge as it was not obvious which file to download and install. This was surprising as I passed the service tag of the device to the online support system.

This one was simple. Insert the CD, enter some data, select the right partitions for installation and let the installer alone for a couple of minutes. After booting the system, plug in the USB hard drive containing the backup of your home directory and copy the files back to the hard drive. Log in and feel comfortable.