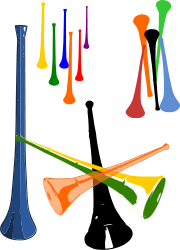 I never was a fan of soccer, but this world cup broke my neck. Though I’m not familiar with the tactics and strategies of this game, it was a great joy to watch the german team and its counterparts.

Thanks to the excellent summer weather conditions somewhere between 30°C and 40°C, I went to a biergarten to attend the match.

The german team is depressed as they, besides others, intended to reach the final game and to get the world cup. But they failed in the semi final versus Spain, so they had to prove they are worth the third place. And they made it. So stop the typical german whining and enjoy what you have reached :) .

A nice match indeed. I will attend again.