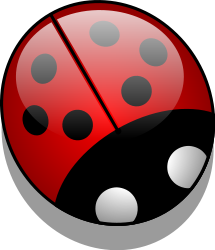 Today I had a couple of minutes left. I downloaded the openstreetbugs of the area nearby as GPX waypoints, imported them as POIs into Mappero (an excellent mapping application for the Nokia N900 BTW), and started editing the data using osm2go. While editing I noticed that a lot of details (schools, kindergartens, parking lots, cycleways, paths) are still missing all over the city.

I admit that I almost immediately stopped mapping Karlsruhe after other mappers finally joined and we had completed the road network back in 2007. I never wanted to map Karlsruhe. I just started the work as there was no data at all back in 2006. What I wanted to do is riding the bike in the country and the woods – and mapping ways and paths between Germany and France. And so I did.

Others have continued the work, e.g. by drawing buildings, railways, cycleways and addresses. But Karlsruhe never reached a similar level of detail that other cities did.

Since I’m contributing to osm, I always heard proud mappers who pointed out the Google maps are that dated and we have that many details. My usual stock answer was that maintaining the data is much more difficult than creating it. Consider a small village which consists of place=village, landuse=residential and a couple of streets. Who will ever notice whether streets are missing, have been renamed or whether the restaurant around the corner still exists?

Navtec, Teleatlas and others know those issues. We still need to learn it. I guess local mappers need to update the areas of their region systematically in certain intervals.

1 thought on “Recently, as I wanted to resolve some OpenStreetBugs”