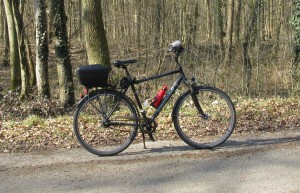 Back in 2006, I bought a Bergamont Satelite 8 bike (about 600€), mainly to get to work. Shortly after that, I detected that biking is fun and bought a Garmin eTrex Venture Cx (about 300€), together with routable City Navigator Europe map data (about 200€). It just took a couple of days until I understood that the map material was made for car routing, not for outdoor activities. A lot of minor roads for biking were missing, and setting the device to do bike routing just did car routing, except that it omitted highway types like motorways. But heck, I wanted to know the shortest possible biking trail from my home to France.

So I was looking for detailed map data. I didn’t find anything useful. I considered to create my own maps, but immediately noticed that this was a cul-de-sac. Then I realized that I’m surely not the first one who had those problems. I was pretty sure there was some cool collaborative project which collects data for map creation. I search for this project, and well, I found it.

I didn’t find answers to the latter two questions. One day I decided to give it a try. There was exactly no data available in Karlsruhe, so I started to collect and contribute my very first data. My first edits took place near the Karlsruhe station, for example the Klosestraße which I mapped Tuesday, Oktober 3 2006 and which surprisingly still is in the data set.

Until the end of the year I guess I had mapped about 50% or 60% of all streets of Karlsruhe by bike, and I did it like there was no tomorrow. After finally some other addicts joined and we had a nice mapping party at the end of March 2007, I left Karlsruhe and mapped towns and villages nearby. But my real passion was to map all kind of tracks and trails in the woods and fields.

I’ve never counted the kilometers I spent on the bike during all those years. But as a tumbling statement, I guess my bike had to work for at least 20.000 kilometers and a maximum of 25.000 kilometers. And I needed to learn that a bike for 600€ is not made to cope with such a workload. The plastic (urgh) pedals broke after a couple of weeks, the hub was replaced by warranty after about five months and the crank ball bearing was replaced three or four times. Since last year, more and more parts gave up. Spokes broke, the dynamo needed to be replaced, and this year both the hub itself as well as its handle bar switch broke.

So I looked for a replacement. I need an everyday life bike to get to work. It needs to be a cheap one, as we do not have any room left in the office to keep the bike protected. It’s outside no matter what the weather conditions look like. After some consideration I bought the same model of the same manufacturer again, though it now is named Bergamont Horizon N8: 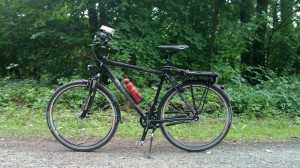 I still like this bike, though it is not made for being abused as a travel bike for addicted mappers. But it will do a good job as a city bike.

1 thought on “Since Openstreetmap ruined my bike…”