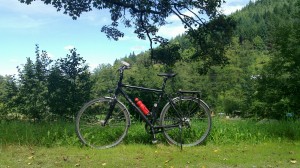 During the last four years my biking trips almost completely took place in the upper Rhine plane, occasionally touching the borders of the Vosges Mountains or the Palatinate Forest. I tried to avoid inclines, as my bike with an 8 gear Shimano hub was not the best companion for such trips.

Last year I had the opportunity to try a mountain bike at the Kaufungen Forest. I was impressed by the possibility to climb steep tracks and trails slowly but steadily in case you have enough gears at your disposal.

The 14 gear Rohloff Speedhub provides almost the same gear ratios as a 27 gear derailleur. This appears non-obvious at a first glance, as the latter one provides nominal 27 gears (3×9). But actually some of the gear combinations cannot be used due to the strong offset, and some rations may occur twice, so the amount of actually usable gears decreases rapidly (obviously I am not really savvy concerning this subject). Meanwhile you can thus buy the first mountain bikes with a built-in Speedhub, and it is obvious that I needed to test mine in a hilly environment.

I took the train to Oos (126 meters of altitude), crossed the inner city of Baden-Baden, headed towards Lichtental and Oberbeuern and chose the tertiary road to the mountain pass »Rote Lache« (690 meters of altitude), crossing Gaisbach and leaving Schmalbach on the left hand side. At Rote Lache, I enjoyed a lengthy lunch break (heck, I had no breakfast). This is the valley of the river Murg as seen from Rote Lache. The village in the foreground is Bermersbach, the village in the background is Gausbach: 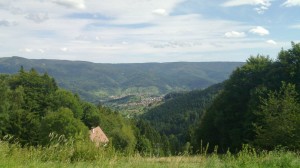 I did not choose the tertiary for the downhill part of the trip. Instead I choose some tracks which I intended to map for a long time now. Here are some pictures of the tracks, in order of their appearance: 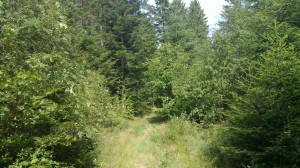 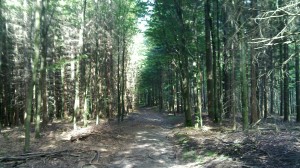 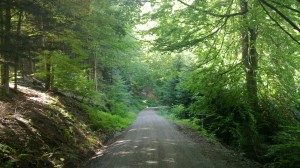 Here’s a picture at the end of the valley I crossed downhill, showing some of the typical traditional hovels: 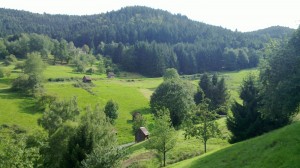 After I hit the valley of the Murg in Weisenbach (228 meters of altitude), I continued the »Tour de Murg« where I stopped yesterday due to some raindrops. I entered the train back home in Gaggenau, omitting a visit in Rastatt. Here’s today’s trip:

Despite the forecast today’s weather conditions have been excellent. It was a warm late summer day with some clouds, and I enjoyed every single minute of the trip.

Here’s one site note concerning the battery lifetime of the N900¹²³. I forgot my additional batteries at home. Thus I set both the N900 as well as Mappero to use the screensaver as often as possible, and I tried to use the N900 only in case I needed to know whether I’m still on the right track, to record some waypoints every now and then and to take a couple of pictures. Mappero was constantly logging a GPS trace, even when the screen was blanked. The battery still had about one half of its capacity available after about 7 hours, and I think this is worth mentioning.

1 thought on “Uphill test of the Rohloff Speedhub”