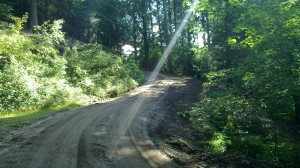 Today I did a trip similarly to the one I did on thursday last week. I wanted to check whether my uphill performance has improved and map some further tracks downhill. Unfortunately I did count the chickens before they were hatched.

Again I choose the train to Baden-Baden and headed towards the Rote Lache pass. But due to the weekend, a lot of cars and especially motorbikes populated the tertiary street, effectively reducing the fun. I thus decided to choose a track in the woods instead of the road. Unfortunately this track provided plenty of shortcomings. Most portions have been bulldozed recently, so the surface was rather weak and muddy. Where not, pebbles of the size of a fist ensured that it was (nearly) impossible to use the bike in the intended manner. Additionally, it was a very steep incline which the Rohloff Speedhub couldn’t compensate.

After I pushed the bike for about two kilometers, the track suddenly declined heavily, so I lost most of the altitude I climbed by foot. And of course the decline was immediately followed by some further steep inclines up to Rote Lache. This means I had to travel most of the four kilometers by foot. Not a problem per se, but hey, I wanted to test my uphill biking capabilities!

Here are the last meters of the track near the Rote Lache pass. The image does not really show how steep it is. A trained biker probably made it, but for me it was too much: 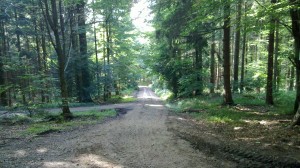 Anyway I mapped some details like benches, fountains, hunting stands and the like along the track. At the Rote Lache restaurant, I enjoyed a trout with salads and potatoes. The trouts are a quite common meal in the black forest area, as it populates most of the many nearby streams.

As planned I mapped some new tracks and further details downhill: 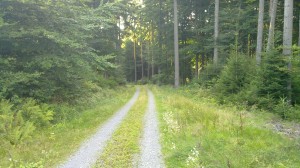 I was trapped once again, though. There was a *very* steep decline. According to my other mappings, it was obvious that it would end at another track. Damn, I was wrong. After several meters, this track ended in the middle of nowhere. Well, not exactly. It ended right beneath a hunting stand. Well, at least I mapped this cul-de-sac properly :) . Here’s the trip, showing where I left the street near Gaisbach:

As most other GPS gadgets, the N900’s GPS is very inaccurate at low speeds, so do not wonder why the track often does not fit the map material.

A nice trip indeed, though not as successful as most others I did. One further disadvantage was the fact the I did not find photogenic fungi. So no fungi pics today. None. Rien. Keine. EOF.