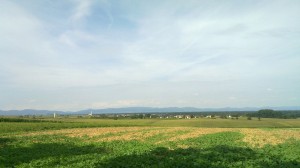 After this post I have to prepare tomorrow’s working day, so my holidays are finally over. As anticipated I got some nice late summer days, though the biking season is slowly but steadily fading away. After several trips to the black forest I revived an old hobby of mine which I started three years ago: during the last summer and early autumn days I’m usually mapping the fields and villages of northern Alsace.

Today’s trip was a lazy one. As the ticket from yesterday’s trip still was valid, I took the train to Lauterbourg and started from there:

I’ve added several details in Niederlauterbach, such as two residentials, a chapel, and a couple of tracks and paths. This is the interior of the chapel of Niederlauterbach: 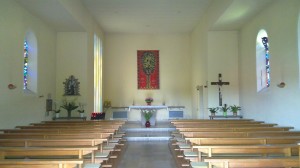 Here’s the church of Niederlauterbach: 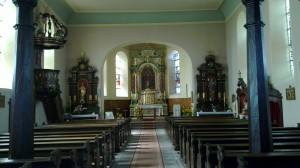 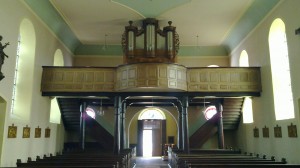 Here’s the church of Salmbach: 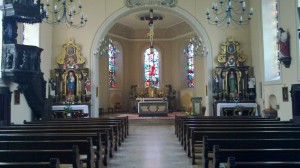 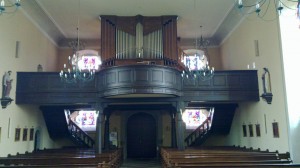 While mapping I noticed that some polygons have been “abused” to describe both physical (agricultural tracks, Lauter river) as well as non-pysical elements (namely boundaries). While I understand the sense behind such mapping, it makes maintaining the data really difficult. It’s a similar issue and discussion whether ways should share their nodes with adjacent landuse areas or not. I tried the latter one in the spring of autumn of 2007 at the Karlsruhe port, and since then I never did it again. At the same time I know it is a religious discussion, and I bet there will never be a consensus along the project members, except we find a good compromise one day which differs from either of the currently used mapping principles.