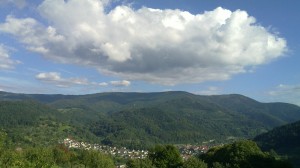 The valley of the Murg above Weisenbach

After a rainy week we got some marvellous sunny weekend days. Yesterday I did some after work mapping in the woods near Neuburg and Hagenbach. Today, I could not resist to abuse the recently purchased bike as a “mountain bike” anew. I chose the Rote Lache pass again as a destination, as I found an alternative route, much better than the one I chose the last time.

The uphill fun started in Lichtental, where I left the primary road and chose an uphill residential. Appearently this road was an official road up to the Scherrhof in former times, but it is closed for motorised transport between the Bußacker shelter and the Scherrhof nowadays – a constantly inclining and quiet paved road, perfect for cyclists. I mainly used gear 2 of the Rohloff Speedhub, which means I have not much headroom left for steeper inclines. That’s why I consider to modify the transmission ratio of the Gudereit LC-R.

As always, the trip was handcrafted before leaving home. While the uphill part used only ways which already were in the database, the downhill part was designed to collect new tracks. And so I did. This is today’s trip:

In Weisenbach, I almost missed the train back to Rastatt. Seconds later and it was gone. This would have been hard, as I wanted to visit Plittersdorf, where a party concerning a recently installed new Rhine ferry took place. But that’s a different story :) .

Only one fungi pic for today. Enjoy: 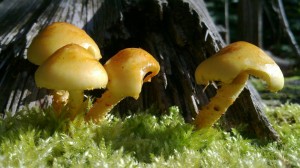