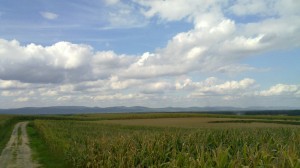 Today’s mapping trip was a lazy one. First I tried to get to a nice restaurant as fast as possible, as its kitchen closes at 2PM. I needed 90 minutes for about 30 kilometers, including the Rhine ferry in Neuburg. Obviously I was hungry: 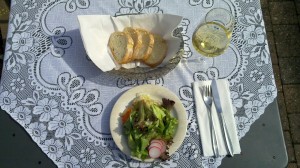 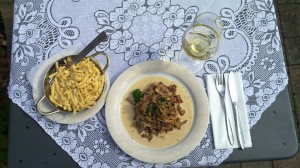 That’s a porc steak, covered by chanterelles. The stuff on the left hand side is Spätzle, a typical food often found in the south-west of germany. Simplified, it consists of the dough of noodles (flour and eggs). Instead of forming and drying the noodles, the dough gets pressed into hot water through a sieve immediately, though. I’m not the biggest fan of wine, but I really like the Gewürztraminer.

I started mapping in Schleithal, where I first added several residential roads. Then I cycled some tracks through the fields. Nearby, a confluence can be found (see the marker). After that I was heading towards Wissembourg, where I also added some residentials. Heck, I thought Wissembourg was completed concerning the residentials, but it wasn’t. Here’s the area:

I enjoyed every single minute of the trip, as it was a cloudy but warm and sunny late summer day. I took the train back home, as I needed some time to get several stuff done – like writing this posting :) .

¹ According to echo $RANDOM