The River Rhine as seen from the port of Lauterbourg

During the last weeks, I collected some extra office hours. Well, the annual release is approaching, and my job requires that I get some stuff managed. Otherwise we’d ship a product our customers would not appreciate.

The weekend will be rainy, and so I wanted to grab some of the last summer sunrails before they are gone. So I just did it and left the office at half past three PM, grabbed the bike and did a nice trip from Karlsruhe to Lauterbourg, Seltz, Plittersdorf and back home. Unfortunately I left the office too late, so the sun was unavailable on the way back. But the rest of the trip was marvellous. There was almost no wind, the air was cool but not cold and the sunrails mirrored by the river Rhine did the rest. The cycleways of the left hand side of the Rhine are great, thanks to the Pamina initiative.

The above image shows the river Rhine near the port of Lauterbourg. The shelter on the other side is a lovely place to enjoy the sunrails. From the shelter to the left, there’s a grit bench. On the right hand side of the Shelter, the Illinger Altrhein is entering the river.

In Munchhausen I crossed the picturesque Delta de la Sauer: 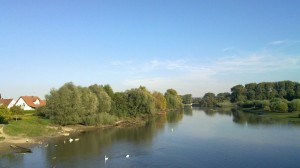 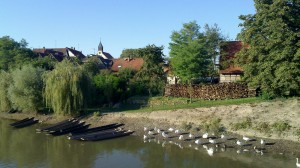 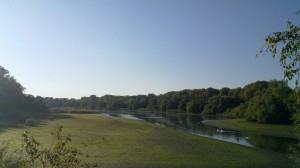 In Seltz I had the chance to test the new ferry. It’s amazing how it crosses the river almost noiseless while you’re not recognizing the motion thanks to the trimaran construction. Even better, its usage is granted free of charge. The more I was surprised that two people are needed to operate it, mainly due to the berthing, which is a rather time consuming process. It’s done by lashing it manually, thus the second employee.

BTW: From today’s point of view, one can barely imagine that and why Germany and France waged so many wars during the last couple of centuries. It’s really good luck to live in times of the European Union.

A nice after work trip. I’ll try to do another one tomorrow if my workload permits, before rain will conquer germany. Here’s the trip: