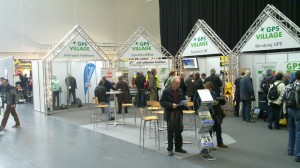 Once again, Joachim Kast managed to organize some sponsors for an Openstreetmap booth at the Horizont Outdoor fair in Karlsruhe/Forchheim. The sponsorship was provided by nogago.com and media-tours.de. As always, Geofabrik helped with various materials (like printouts). The rest of the booth was made possible by members of the OSM community respectively the helpers who did the on-site work.

The fair was well visited, as was the OSM booth.

Last year, many people were mainly interested in free maps for their Garmin gadgets. This year, people were more interested in the project itself. I often sense that people who are not that savvy about computers and the internet cannot imagine at all that Openstreetmap is a free and collaborative project, driven by enthusiasts. They also have difficulties to understand that we do not paint maps “manually”. The concept of a database hosting geo data, which in turn is used to automatically create different looking maps, is not easy to understand for many people. That’s not a problem, but those people will have difficulties to find all the other interesting maps except the one they realize as »the osm map«.

Many wanted to know whether we have map data available in certain regions of Europe, South America, Africa, or Asia. I had a conversation with a guy who intends to spend his holidays in spain, mapping cycleways, and who needed some hints which device to use, how to map, what to map, and which details he should pay attention to.

Next to our booth, Touratech demonstrated GPS mounts for motorbikes and version 5 of Touratech QV, a popular mapping application for operating systems developed in Redmond. The application allows to use several sources of tiles which have been generated using openstreetmap data. The tiles are mapped to a three dimensional mesh of the earth, and I assume it’s using SRTM data to create the mesh. The mapping results in some deformation of the map tiles, so it’s not a perfect solution, but surely sufficient for many uses.

We also got an offer for an interview at one of the public forums, and Joachim did not hesitate to attend – a great chance to “spread the word”.

I wasn’t at the booth today, so I cannot comment about today’s activities. Maybe one of the others will write another blog entry. Thanks to all who helped to make the booth possible.