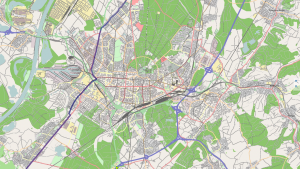 Karlsruhe Vector Rendering in MoNav (Data by openstreetmap.org and its contributors, CC_by-SA)

Today I adjusted the MoNav vector renderer a little bit, just to get more ways relevant for cyclists into the map. The renderer does not support rendering of street names as of yet, and there’s still a lot of work to do to get all the details solved that make a nice looking map. But anyway, the map already does its job.

The map data for germany converted from OSM pbf to the MoNav format requires more than 4GB of free mass storage. Of course I couldn’t resist the temptation to try it on the N900. Panning works almost as smooth as panning a raster image map. It’s really a joy, and a dream I had back in 2006 when I began to contribute to openstreetmap.org comes true: 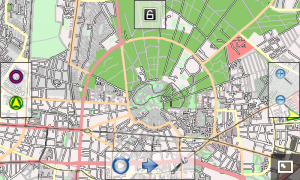 Thanks to all who contributed to MoNav. Feels a bit like Xmas :) .