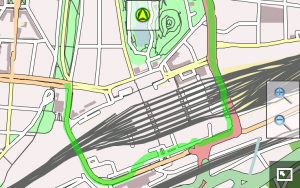 As the openstreetmap addict I am, I want to log any trip I do. Recently I told MoNav how to do it, but the tracks did not appear on-screen.

Meanwhile the tracklog gets written in GPX format natively (support for track segments is provided), and MoNav reads the current GPX tracklog during startup. The tracklog files are named according to the current date (e.g. MoNav Track 2011-03-10.gpx). In case one quits MoNav right before 12PM and fires it up again right after 12AM, the track will appear empty due to the new log file created. Each time the tracklog gets flushed (current default value is every 60 seconds), MoNav creates a backup file (e.g. MoNav Track 2011-03-10-bck.gpx), just in case the battery drained while the file is open for writing.

A couple of minutes ago, I did a short test trip around the station in Karlsruhe, which is witnessed by the above screenshot. Obviously the GPS receiver of the N900 was not that accurate, which is due to the fact that I had it in my pocket, not mounted to the handlebar.

I’ve already seen a couple of bugs, e.g. the track painting is lagging behind the actual GPS position by a couple of seconds. I hope I can iron out such issues during the next couple of days, as the biking season will hopefully start »real soon now«™.

The code is not in SVN yet, as some other patches still are pending for being approved. I’ll keep you posted as soon it is in SVN.