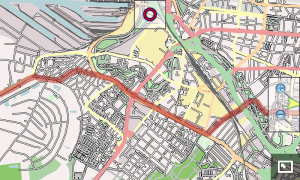 Since the last post, I spent a couple of hours writing code for MoNav. The follwing list provides an overview over the lastest additions of mine: