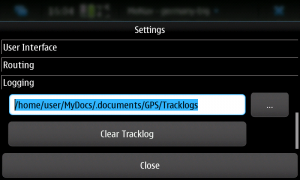 Due to a nasty bug concerning the generation of tracklogs, I’ve updated all MoNav packages (Ubuntu i386, Ubuntu amd64, Maemo). The code is tested during two trips and behaves »as advertised«. Hint: On the N900, you’ll need to scroll down a bit in the preferences dialog to access the button to clear the tracklog (see the above hardcopy).

Desktop users do not need to update, as the desktop versions do not support GPS subsystems. N900 users should update the package as soon as possible.