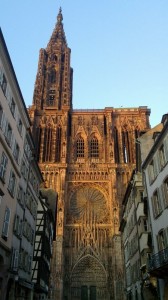 The minster of Strasbourg, with its unfinished right tower

What a great april, at least concerning the weather! I decided to visit Strasbourg, the great medieval city where I haven’t been for over a year or so.

I let MoNav do all the routing, and it led me a really great way. So what about the initial question? Of course it can, that’s out of the question. There’s a grain of salt, though. As you can see in the tracklog rendering below, huge portions of the route led over cycleways along major roads – which is not exactly what you want during a sunday afternoon trip. I need to experiment with an additional routing set, which pays more attention to additional tags for convenient biking routes.

I crossed Rastatt and reached Schwarzach, where a great romanesque minster is sited: 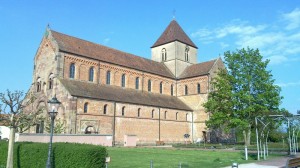 The minster of Schwarzach

This is the interior and its organ. At least the carcase shows the traditional baroque design. It would be interesting to know what instrument it hosts inside: 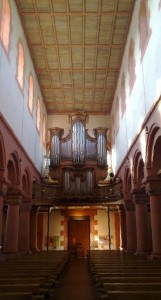 The organ of Schwarzach minster

Here’s a shrine, hosting a skull and other remains. Frankly, I never understood this weird catholic tradition of exposing parts of dead people: 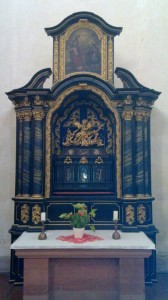 A shrine of Schwarzach minster

And just another object, a sculpture on one of the walls: 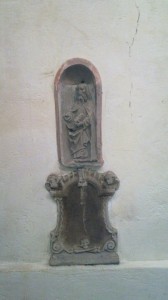 A sculpture of Schwarzach minster

I left late, and so I arrived late. Most tourists had left before my arrival – I’ve never enjoyed Strasbourg more. The street restaurants were populated mainly by local inhabitants. A great chance to have a nice supper in a nice atmosphere. Here’s as gratin of asparagus with ham and salad: 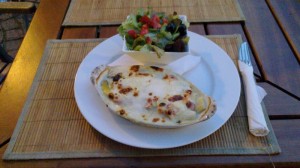 Gratin of asparagus with ham and salad

On my way back to the station, MoNav showed some weird route every now and then. Sometimes this happens due to an offset GPS location. Additionally MoNav currently ignores pedestrian streets for bike routing, which needs to be changed. But anyway I guess it needs some tweaking of either the openstreetmap data or MoNav’s code for better bike routing in inner cities.

A really great trip. I enjoyed each of the 88 kilometers. I predict I’ll repeat it this summer: