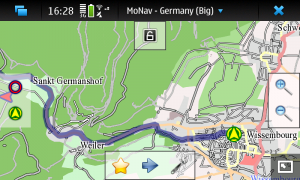 Christian Vetter, the inventor and maintainer of MoNav, just announced the release of MoNav 0.3. Finally the improvements and new features developed during the last weeks and months are available as precompiled installers. Here’s a copy of the original posting:

I am pleased to announce the release of the 0.3 version of MoNav
[1][2][3] just in time for your favorite Easter holiday trip.

The highlights of this release are:

We are still looking for contributors in the following areas:

Disclaimer:
Please note that this project is under active development and while
considered stable may still contain serious bugs.
Comments, bug reports and suggestions are welcome and can be filed under [9]