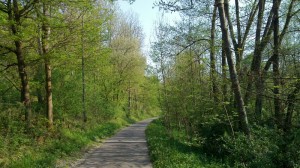 On sunday (easter 2011) I got up early for a trip I was planning for some time now. I left cloudy Karlsruhe before 6AM, passing rainy Heilbronn and reaching sunny Lauda at 9AM. A nice trip along the lovely valley of the Tauber river began.

First I crossed Tauberbischofsheim, then I reached Hochhausen: 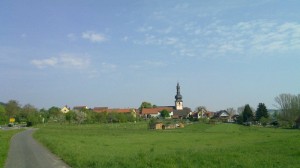 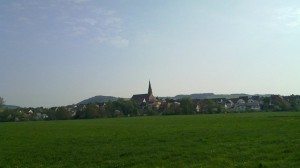 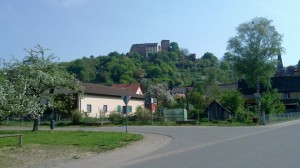 The following picture should give you a clue about the size of the Tauber: 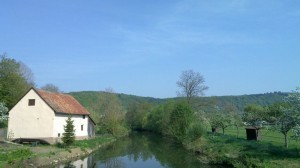 After that bridge, MoNav advised me to climb the hill instead of following the valley. So I did, passing the remains of medieval sculptors on a gravelled track: 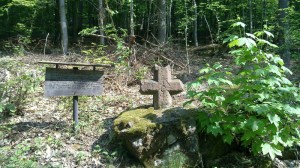 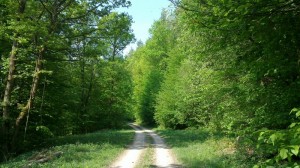 The track ended close to the famous Bronnbach monastery: 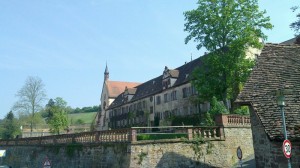 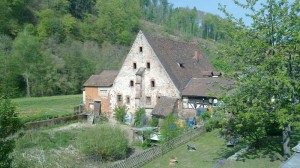 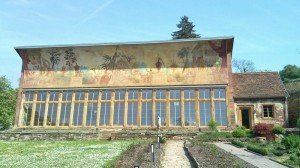 The complete region is an ancient cultural landscape. Every now and then, one can find its remains: 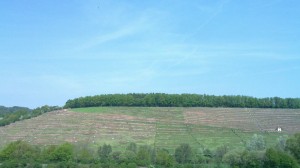 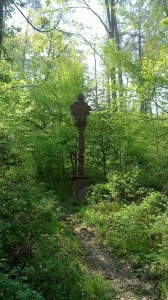 I left the valley before Waldenhausen, heading to the high plateau, as I wanted to visit some family members: 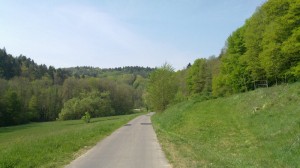 After Dörlesberg, there’s an isolated dwelling called Ernsthof. Nowadays it is surrounded by a huge solar power plant, which is part of one of the biggest solar plants of europe: 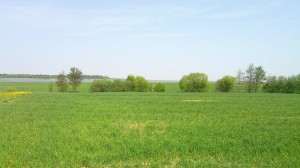 This is Richelbach, the village where I grew up. It’s hidden in the valley behind the acre in the foreground. At the bottom of row of trees on the horizon, you can imagine a small grey bar. This is one further part of the solar plant mentioned above. It was finished just recently and is sited about 100m from my parent’s house: 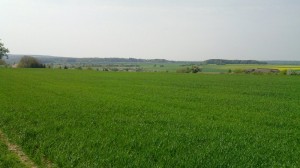 After some nice lunch (thanks mom :) I left crossing the woods between Richelbach and Eichenbühl, where I visited a friend of mine: 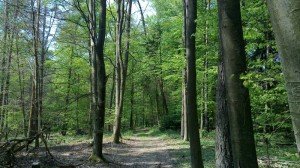 Following the valley of the Erf river, I reached Miltenberg am Main, a medieval town where I lived for several years before I moved to Karlsruhe: 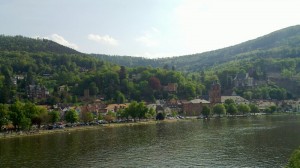 I dislike to admit it, but I sensed it before. Due to some contrary wind and the trip to the Wasigenstein two days ago, I took the train for the rest of the tour to Aschaffenburg, where I wanted to visit my grand ma and some friends. Here’s the renaissance castle of Aschaffenburg: 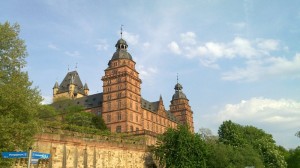 From Aschaffenburg, I took the train back to Karlsruhe, where I arrived at 10:30PM. Frankly, »traveling with Deutsche Bahn« is not my favourite leisure activity, but just a necessity.

But anyway, I really enjoyed the trip. Add to the pictures the typical smell of a rural region during spring and you know what I mean :) . I crossed almost the complete area of my childhood and youth. It was very nice to see what changed and what remained since I left. It was also great to talk to family members and friends face to face.

To answer the initial question: Yes of course it can. However, it was necessary to pass MoNav some via points to make it avoid inclines. Additionally, our openstreetmap data is neither complete, nor is it accurate at all places. This triggered some unwanted deviations, especially in the woods. As a consequence, you should not trust any routing application blindly. It’s always a good idea to compare the computed route with the underlaying map. On the other hand, I used a stock compilation of MoNav 0.3, and it served me very well. Additionally, this means that I was able to improve and add several details of/to our geo database :) .

Here’s the trip from Lauda-Königshofen to Laudenbach station, where I took the train to Aschaffenburg: