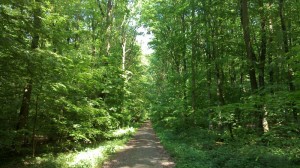 Today my way led from Darmstadt to Aschaffenburg, where I visited some relatives and friends. MoNav did a very good job guiding me. As it chose a route which led along major roads, I set a via point in Messel, and got really great results.

The trip info page I recently introduced was very helpful. Well, it’s like a progress bar on computers. It does neither shorten the remaining distance, nor does it beam you to the destination. But anyway, it’s very useful to have some figures right at your fingertips during the tour, so you know whether you should hurry or you can enjoy a short rest.

The trip was about 50 kilometers which I planned to cope with in 2 hours. Though the terrain is completely flat, some head wind caused an average speed of 20 km/h only – I needed 30 minutes more as I planned.

Once again, I really enjoyed to have MoNav’s excellent offline routing available during the trip. Before I used MoNav, I spent hours in front of my computer to prepare a trip. Today, I just check what MoNav suggests before I leave and help it with some via points – that’s it. An issue of minutes, not hours.

I’d like to thank all Co-Mappers who contributed the data I used during today’s trip. Thanks girls and guys.

¹ According to echo $RANDOM