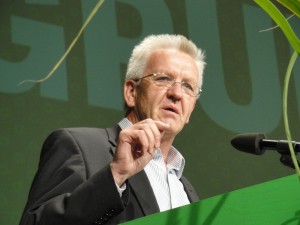 Baden-Württemberg is the southwestern state of germany, known for the black forest, Cuckoo clocks, apple trees, its automakers, and its strong economy. It was governed by the Christian Democratic Union for about 58 years.

After the last election, the green party formed a coalition with the Social Democratic Party. Today, Winfried Kretschmann has been elected as the minister-president, for the very first time for a member of the green party.

I doubt that this government really represents the mainly conservative inhabitants of this state. Actually, according to what I read, many people seem to fear the new government will degrade the economics. Additionally, there are some legacy issues they will have difficulties to cope with, e.g. the purchase of EnBW by Stefan Mappus or Stuttgart 21.

Others may desire dramatic changes. »Kretsch« and Nils Schmid of the SPD already announced a more democratic style of government, and promised better education as well as to enforce the nuclear power phase-out.

I personally find the two latter points very important. Thus I really appreciate the change. As I doubt that Kretschmann has a chance being reelected, I trust he really knows how to make use of the next five years.