After Apple switched to Intel CPU based machines a couple of years ago, I bought the smallest model of the Minis available: 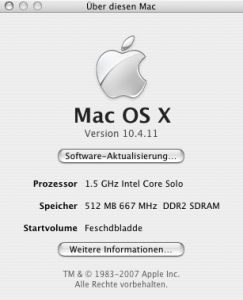 I didn’t use it much. It mainly served me to create binaries of some cross platform applications I was working on. However, it’s CPU speed and amount of RAM are a bit limited for nowadays requirements. Additionally some contemporary applications denied to run on Tiger, and updating the OS on the feeble machine was not an option. Thus I bought a more recent machine powered by Lion s/h: 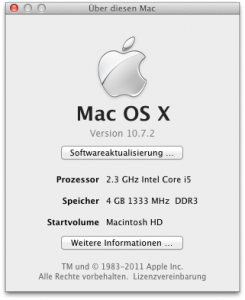 Its base size is more than the one of its predecessor: 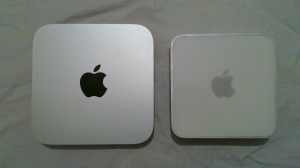 I’m glad that Apple dropped the optical drive – I didn’t use one for years, and even if, only to convert some of my audio discs to ogg files. As a consequence, the new Mini is a bit thinner than the older model. Here’s its connectivity: 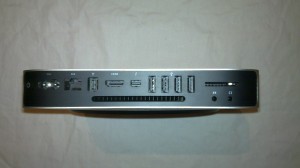 The user can easily access the RAM slots just by turning and removing the bottom of the device:

The overall operation feels much smoother now, and it operates quite well on the recently purchased Dell display. I already ported all of my data from my Dell Notebook to the Mini, as it will serve me as my primary desktop machine. I’m pretty curious whether I will find a replacement for any application I was used to on the Linux notebook. Of course I will :) .