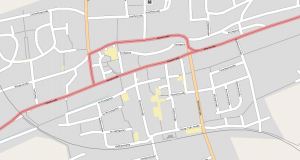 Thanks to the work of James Hollingshead, MoNav now provides street name rendering at high zoom levels. This required a change in the map file format, though, so the currently available maps (which admittedly are rather dated) won’t work with binaries built from the current tip of revision control.

The new code is already available for two months now, but I hadn’t had the time to check it out. Today I got the client to compile on Max OS X 10.7.2 (aka Lion). I did not get the map preprocessor compiled, neither on Lion nor on the server, due to missing mapnik dependencies, but I got it compiled on my local Linux box.

The above screenshot shows the inner city of Kandel in Rhineland-Palatinate. I usually use this state for test runs for creating maps, as its file size is acceptable for my desktop machine.

I’m quite grateful that James did the work of creating the first vector renderer for MoNav, and that he now also added street name rendering. The next step is to get the preprocessor compiled on the server, though this might take a little while as the map processing script needs adjustments too. For Maemo on the N900, an updated binary is already available via the repo. Before you install it, ensure you have updated map data available. Otherwise you will end with an updated binary which cannot load the map data present on the device – a rather useless constellation from a user’s point of view.

Thanks a bunch, James.