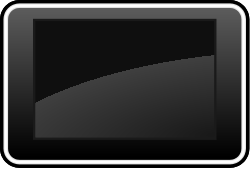 As mentioned a couple of days ago, I bought an Android device recently.

A tablet computer mainly serves as a device for consuming data – music, videos, images, e-books, News, web pages and the like. It’s also useful for applications which do not require much text input, so writing a brief eMail or a posting to a social network is an option also. And last but not least playing games seems to be an important aspect for many users, too.

Since typing on a touch screen is not convenient for longer texts, I was looking for a device with a physical keybed.

As the OSM addict I am, I was interested in an integrated GPS receiver. A 3G modem was of interest, too.

The Eee Pad Transformer is a plain tablet, except for the fact that it can be placed into an optional docking station which turns the tablet into a netbook. The dock provides additional connectivity (like USB) and battery power.

The first transformer was the TF101 with a plastic back. Its successor, the TF201 (aka Prime) provides a metal back, thus GPS and 3G do not appear as an option. I bought the TF101G (G is for 3G) without the keyboard dock (which I may buy later).

The overall build quality of the device is good. The display (which, unfortunately, is glossy) sits flush in a metal frame. The plastic back provides some grip and does not leave a feel of cheapness. Bending the metal frame intentionally is possible, but will not be noticable during usage.

The Metal frame hosts the following:

The device comes with Android 3 preinstalled. 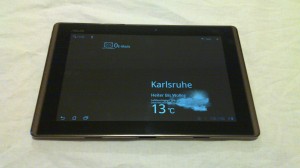 Asus meanwhile provides Android 4 as an update “over the air”. First the rollout for the TF201 series started, and meanwhile the first TF101 users got it as well. However, some users are complaining about issues, and appearently the update for the TF101G series is held back by Asus. If you want to use bleeding edge technology, feel free to update and cope with the issues. If you want a device which “just works”, keep Android 3.

To root or not to root

I decided neither to root the device nor to install an alternative operating system. I just tried to explore the device in a similar way that users do.

However, since Android is not free (as in speech), I’m pretty sure that I will install CyanogenMod rather later than sooner, just to avoid loss of control over my private data.

A bunch of applications is preinstalled. 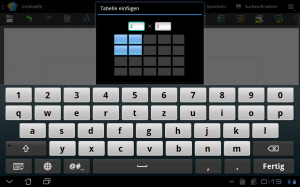 The device also provides a speech recognition application. However, it can cope with short snippets only. From what I’ve read, Android 4 will provide a streaming conversion feature. It’s one of the features I’d be interested in, though I do not expect it will really work that well that you can use it to convert speech to text in an absolutely reliable manner.

It is likely that users want to copy data from their computers to the device, such as digital images, music, or video files. Thus one might expect that a tablet with WiFi connectivity should appear as a shared drive in the wireless network setup. Surprisingly, it does not. Instead, there are several third party applications available to run a HTTP or FTP server on the device. Alternatives include running rsync or Webdav.
A couple of tools at least are capable of providing an SMB/CIFS client, so users can browse network shares from the device. For rooted devices a Samba server is available.

Neither of those solutions is convenient to install and use for average users.

Yep, geeks want to run an ssh server on any device they own. Fortunately droidsshd is available. Unfortunately, when running the server on an unrooted device, an attempt to log in will result in an error message that some log file could not be written. That’s not an issue when loggin in from a terminal emulation. But both Macfusion as well as Cyberduck deny to connect to the server. Thus I updated from version 0.5 to 0.6. But this version does not even start on the device while providing no error message at all. I need to debug it as soon as I find a couple of minutes.

The proprietary USB cable that comes with the device can be used to load the battery, to copy files between the tablet and the desktop computer and to run applications transparently and directly from your IDE for debugging purposes.

Android 3 does not provide a standard mass storage mode, as this would lock the flash memory for applications running on the device. Instead, the device uses the Media Transfer Protocol, MTP. To talk to your device, you need an application which is capable of doing just that. There’s one provided by Google.

This approach causes some drawbacks, as the application (respectively the protocol used) is limited compared to mass storage. For example, the user cannot double click files on the device to open it from the desktop remotely. Additionally, connecting a tablet to a computer via a USB chord is not what you want to do in case you have WiFi available.

Filesystems are a nightmare for average users and inconvenient even for people who know how to cope with it – especially when the user is required to type a path manually. 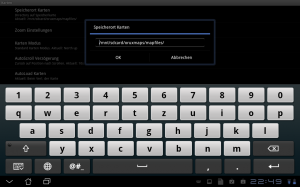 As a consequence, developers try to hide the file system from the user whenever possible.

A file indexing mechanism (aka tracker) reads all user files and extracts respectively generates metadata for the files. A music player then allows the user to sort the collection by artist, genre, or album. An image viewer lets the user access the images from a thumbnail view gallery. An eBook reader shows the author and title of books combined with a cover view. It is convenient that the user does not need to care where the files are saved on the storage medium.

On the TF101G, this approach shows some drawbacks nevertheless. The image gallery, for example, does not only show the pictures you have taken with the device, but it also shows any other images found on the device, such as audio album or eBook covers. This makes it difficult for the user to find her photos.

I downloaded a couple of eBooks from the Guttenberg project. The eBook reader (called MyLibrary) crashed after that, and kept crashing once even after I removed the files. It meanwhile copes well with a reduced amount of eBooks.

PressReader crashed as soon I tried to access the TOC of an PDF.

I wonder whether I’d buy an Otterbox in case it was available and mount the TF101 to the handlebar of my bike. There are protectors available, e.g. made out of neoprene or even rubber.

The first days I ran the device with no SIM card inserted. I got the impression that it used a lot of battery due to the missing card, though this observation might well be wrong.

Meanwhile 3G is available. I haven’t figured out how to use it correctly; often the device complains there was no connectivity, though the N900 has (both devices use the same provider). Later it connects automatically. I guess I need to tweak some settings via its control panel.

When downloading and installing applications, the application must disclose to the user which features of the device it intends to use. Many “free” (as in beer) applications display ads and require access to the internet. Some additionally require that the users grants access to contacts data. It is up to the user to decide whether to install such an application. Despite that mechanism the user does not exactly know what the operating system or an application actually is doing.

It is not only Google who provides a platform for downloading and installing applications. Additionally the TF101G allows to install applications from locally available application package files as well. Here are some alternative markets:

I’m pretty content with the device. The TF101G, though not exactly cheap, provides a pretty good ratio of features per ¤. Android provides more Linux than I expected. The user multi touch user interface works well, and the available apps turn the device in a useful companion.