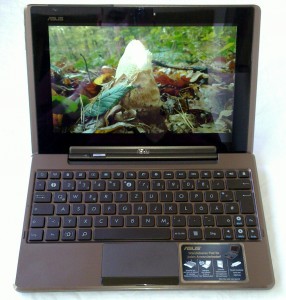 One use case of the recently purchased slate was to take notes, e.g. during conferences or while reading a book. It turned out that the on-screen keyboard of the pad does not serve much better than the mini keyboard of the N900 (which is very useful compared to its size BTW). So I ordered the dock for the Transformer to turn it into a netbook of 1320 grams.

Despite its reduced size, typing is almost as convenient as on a full sized keyboard. I especially appreciate the cursor, home, and end keys. Additionally I love the dual input capabilities. Since I use touch screen devices, I wished I could sometimes use the panel of any noteboook to press buttons etc. Finally I got it.

I’m still content with the device, though I’d like to mention two issues concerning its build quality. The plug to connect the device either to a desktop computer via USB or to charge its battery soon lost its plastic cover. Additionally, the cover of the SIM slot fell down while inserting the card. Neither of them is a severe issue. I’ll just use some two-component adhesive to fix it. 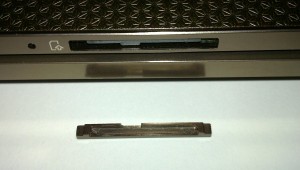 There are several IDEs (like AIDE or DroidDevelop) available, so developing applications for android can be done on the device directly, without the dependency of a desktop computer. This means the Transformer can almost be used as a replacement for a notebook, even for off-site coding work. Lets see whether I’ll have an idea for some cool Android app later this year.