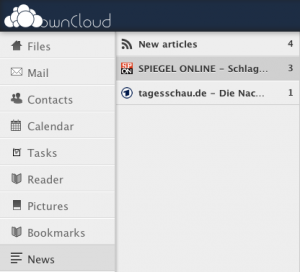 Meanwhile Cloud Computing became a buzzword. From a user’s point of view, it often describes sync services that keep files (images, music collections) and data (contacts, calendars) up to date on multiple devices (desktop, tablet, handset). For the user this happens transparently, so she does not need to know how it is accomplished, ignoring the immanent privacy issues. For me it’s “just another server software”, though not the one of least interest.

I’m lurking around ownCloud, a personal open source cloud service software which one can install on her own machine, for quite a while now. It does not only provide the usual feature of synchronizing files across one’s devices, but also a web interface with several applications (Contacts, calendar, PDF viewer, text editor, and the like).

As one of this year’s GSoC’s projects, a news reader was initiated. I like the idea of a centralized personal feed manager, but currently it is not really fun to read feeds via ownCloud’s web interface using a handset like the N900 – not to mention offline use. Native applications would probably be better, but that’s out of the question.

So I’ll check the progress of ownCloud over the next weeks and months. I’ve never written code in PHP, but I see opportunities rising…