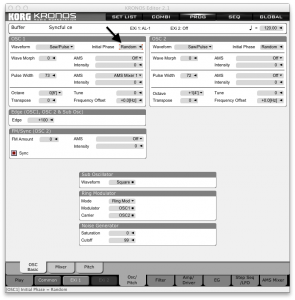 The AL-1 engine of the Kronos features a parameter to define the phase of its waveforms. Besides the range of -180 through 180°, a »Random« value is provided. This neat feature reminds me of my first real synthesizer, the Waldorf Microwave I, which featured a similar parameter called »Startsample« (page 3-13 of the programming manual).

In case two oscillators are used, the different shift at each key press causes some phase cancellation effect, so every note sounds a bit different, breathing life into a sound’s soul. However, this effect is not always desirable. Especially sounds with little partials can become almost silent at some keypresses. Sounds with lots of partials, however, clearly benefit from this setting.

Since fulfilled wishes trigger new ones, I’d like to see two more parameters, so that one can define a range within the randomisation takes place. But that’s the cherry on top. I’m content with the cake already :) .

The Kronos’ MOD-7 engine provides a further parameter called »Free Run«. This emulates the behaviour of old analogue style synths where the oscillators are running constantly. Thus the phase at each key press was also “Random”, but the deviation between two key strokes is much less (and thus much more subtle) than with the »Random« value.

Anyway, I always thought that the AL-1 sounds a bit too static and digital. Detecting this parameter changed things a lot and made my day respectively eve :) .