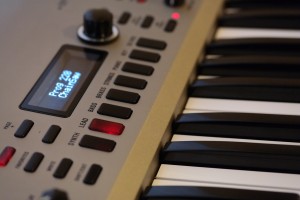 The KingKorg provides live keyboarders a lightweight synth that covers a wide range of sounds required on stage. At the studio (respectively at home) it is an easy to understand and to program synthesizer. 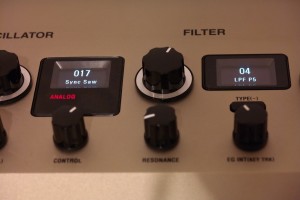 It’s a three oscillator virtual analogue (VA) machine with several oscillator models, which provide classic waveforms (including sync, ringmodulation, frequency modulation, phase modulation, and various shades of noise), DWGS waveforms, and selected samples (including an electric piano and the infamous M1 organ). It provides a modeling filter which includes a bunch of classic filter emulations. The effects section provides three effects, plus a global equalizer and tube. Besides the main display, it provides a dedicated display for the oscillator’s waveforms and the chosen filter model.

There is no dedicated multi mode. However, each patch consists of at least one timbre, or two which can be used to create split or layer sounds. Both timbres A and B provide the full power of the synthesis engine.

One of the strengths of the machine are sounds with lots of detune. There are several oscillator models supporting this (both dual and unison saw, square, tri, and sine) as well as a unison mode with a dedicated button on the panel.

I got the impression there was a strong product owner with a clear vision in mind. The engineers did resist the temptation of developing tons of features. For instance, each LFO provides exactly five waveforms – that’s it. And there are “only” 300 slots for saving programs – little compared to other machines, but still much more sounds any keyboarder will use frequently. Not to mention the dedicated buttons on the front panel to easily find the sounds required.

Programming a sound’s basics is a joy. But still many parameters are hidden in the menu and sometimes difficult to find. It’s a tradeoff. Do basic things quickly, while tweaking requires more effort.

The controls provide the right size and feel, and the keybed is at least of medium quality – I’ve seen syths with worse ones. BTW: The characteristic of the keybed can be switched between normal, deep and shallow – the latter one is especially useful for organ sounds. I’ve seldom seen such a feature on other synths. However, AFAIR, the latter two modes lack the capability of transmitting velocity information. 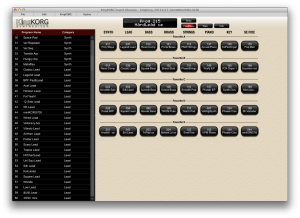 There’s a simple librarian provided by Korg. Besides some basics, it does not allow editing. IMO that’s a good thing – the synth was designed for on-device programming. 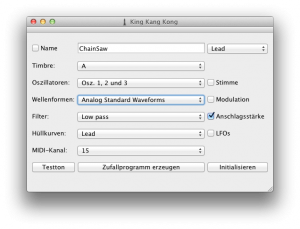 To have some more fun with the machine, I wrote a simple randomizer (not to be released). It creates random values for the KingKorg’s parameters, paying attention to some dependencies and limits. It helped me create the basis for a couple of nice sounds.

I used an Alesis micron and a Waldorf microQ a couple of years before. I perceived the sound of both as boring. I missed living and breathing in the oscillators, and the envelope generators of either device didn’t do what I expected them to do. But both machines are available at the half or a third of the price of the KingKorg, so such a comparison is not really fair.

The KingKorg is much more versatile due to its many oscillator as well as filter models. The envelope generators are really fast and allow the creation of the standard sounds like bass, lead, synth, but also pad sounds. The punch parameter (which raises the amp level during the envelope’s attack phase) does the rest.

The Access Virus (I owned the C desktop version for a couple of years) provides premium quality sounds, but is twice as expensive as the KingKorg – this once again was comparing apples with pears.

The KingKorg provides great value for the money. In case someone is searching for an easy to use, lightweight, flexible, and affordable device it might be a good choice. I’d not label its sonic capabilities as »premium«, though. I spent a couple of really pleasing hours playing the device, but finally sold it last week.