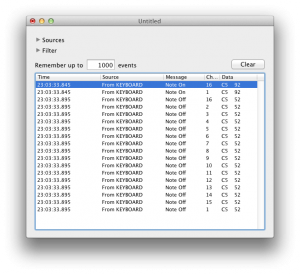 The Korg Kronos is an absolutely incredible machine, and I’ll never explore all of its capabilities.

I have trouble with two combinations of this PCG file, though. I use a Kronos X 88, operating system 2.1.1.

The combination 001: Aeolus was intended to control Aeolus, a pipe organ emulator running on a Linux system. When playing a couple of notes, including the leftmost A on the Kronos X 88, and switching back and forth between Combination and program mode, playing a couple of notes in either mode, the Kronos quickly reaches a mode where it stops MIDI output, shows some weird behaviour and finally freezes, requiring a reboot. Unfortunately I haven’t figured out yet exact steps to reproduce, so it is hard to analyse the issue.

Delayed notes on MIDI out

The combination 002: External MIDI was intended to control some external synth, e.g. an Access Virus TI 2 via MIDI out. Via the panel buttons, Timbre/Track 1 only is enabled, all others are muted. When playing the Virus via the Kronos, everything behaves as expected. As soon the modulation joystick is moved to Y+ (“Modulation wheel”) to apply vibrato to the sound, the vibrato appears delayed on the Virus, and releasing the key does not stop the note until about half a second passed.

Looking at the events coming over USB, I notice the following:

According to this posting, other users have experienced similar problems, though it does not seem to be reproducable. Unfortunately two subscription request to the forum left unconfirmed for a couple of weeks, hence this posting.

Fortunately there are workarounds to circumvent those issues. I solved the former one by not using Aeolus ATM. Instead I converted Jeux d’orgues 2 for the Kronos and use this sampleset instead.

The latter one was solved by using the pitch wheel of the Virus directly instead of the Kronos’ joystick. However I’d like to mention that I’d prefer the stick over the wheels.

In case someone was downloading the provided PCG file and can confirm the abovementioned behaviour, I’d be interested in some feedback, e.g. by leaving a comment. If someone knows where to file a bug report, I’d be interested as well. 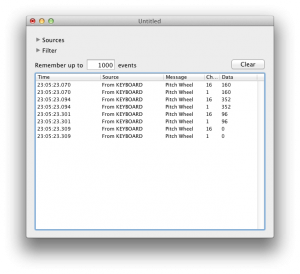 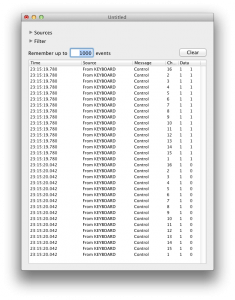