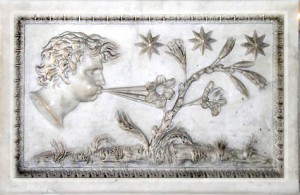 Despite the low CPU footprint of Aeolus, it turned out that the Raspberry Pi was too weak to run it with many stops “pulled”. Therefore I tried the more recent Raspberry Pi 2 Model B in conjunction with an Edirol UA-25 UB breakout audio box. The first tests look very promising so far.

Here are some configuration hints. The list is neither complete nor free of bugs, since I wrote it after the work was done.

For connectivity, I use the EDIMAX EW-7811UN Wireless USB Adapter. A web search easily unveils the required configuration steps, like this one.

As soon the Raspi is diconnected from its power supply, it will forget about dates and times. I use ntpdate instead of ntp to set this information as soon the OS boots. I used some instruction from this page. It’s in german language, though – je regrette.

Here’s another german page describing how to increase the power of the on-board USB ports. It didn’t help on my machine to cause the low power indicator square at the right top of the screen to disappear. I recommend to use a powered USB hub anyway. Unfortunately some hubs are rather weak in processing certain protocols.

Here’s some stuff I installed:

I use those settings in qjackctl to get stable jack perfomance. The latency is acceptable, though not great. I hope to improve it later. 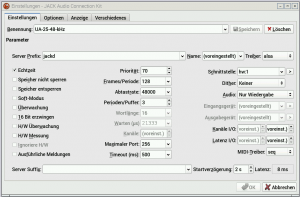 Persuading VLC to use jack is a bit confusing on german language machines. Choose

To make applications to start automatically after login to LXDE, edit

and enter the name of the application prefixed by an »@«:

Aeolus will compute the “waves” for each particular stop during startup, which can be rather annoying. To avoid that, the waves can be saved to disk via the »Save« button. This, however, requires that Aeolus can write to a subdicrectory named »waves« in the stop directory. This is not the case in the stock installation. Thus I copied the stops to the home directory:

I did some further tweaks to the Aeolus installation, though quick and dirty. Last but not least I wrote a dirty script which is run by qjackctl after jackd is up and running. It automatically starts Aeolus with some parameters, and sets up the required audio and MIDI connections.

I’m running a owncloud server in the LAN which I use to transfer files between my machines. For the Raspi the main purpose is to share music scores and ogg respectively mp3 files of organ music. There’s an owncloud-client in the repository, but it’s rather barbed and not compatible with recent versions of the Owncloud server. Some tutorial to compile it manually didn’t work straightforward, so I stopped those efforts. Currently I’m mounting the file share via webdav. However, the sync is fast as snails, so I don’t recommend it. I hope to get the owncloud client compiled during the next weeks. Until then, a USB thumb drive will do…

That’s it so far from my installation log file. It’s not a tutorial, and a lot of detail is missing. It’s just a reminder for the next time I’ll set one up.