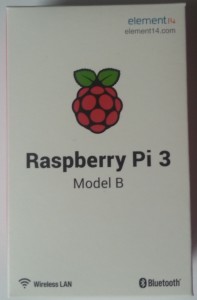 I run a Raspberry for some special purpose application, mainly to record and playback audio and MIDI and remotely controlling some musical instrument. Former hardware revisions provided too little horse power for the task, so the Pi 3 was very tempting. Actually, QTractor now runs without complaining about insufficient CPU frequency, so it obviously was the right decision :) .

The Pi 3 provides two cool new features, both onboard Bluetooth and Wifi connectivity. Thus I bought a Logitech K400 Wireless Touch keyboard (the former model, not the current one) which was just plug and play.

However, I ran into trouble concerning network connectivity. HTTP is very slow. I got none of the NTP applications to work, which is rather painful since the Raspberry provides no battery to keep the time between reboots. ssh is barely usable, since establishing a connection is like some lottery and typing characters via ssh has some severe lagging issues (“5 secs per character!”).

There are a couple of web pages which show that I’m not the only one. For the moment, I gave up in the hope some OS update will improve the situation. Here’s what I tried so far.

After the issues appeared, I updated the operating system.

The former models I ran had no problems connecting to the network using an Edimax EW-7811UN Wireless USB Adapter. Thus I disabled the internal WIFI adapter by editing

Assuming my rather dated router has problems with the default IPv6 connectivity in Debian Jessie, I tried to completely switch to IPv4:

Some people reported that disabling the power saving for the WIFI adapter did solve the issues for them. However, a temporary

does not work for the adapter. The iw command even does not recognize it. iwlist wlan0 power reports that power saving is off already: wlan0 Current mode:off. Anyway I tried to add a line to the interface in /etc/network/interfaces:

There are several other pages with hints concerning this issue. I dropped ntp and openntp in favour of ntpdate according to aufschnur.de. Meanwhile, after performing several attempts, I got the time sync working manually using ntpdate -s 0.de.pool.ntp.org – once. After a reboot, the internet connectivity is as unstable as before, and the aforementioned command does exactly nothing. I assume this is due to some built-in timeout.

kyuzumaki reports that the power supply may have an impact. I once also had issues with a touch screen not working corrently which I actually solved by attaching a more powerful supply. However, that current issue was not solved by using the official RPI wall wart.

The issue may have to do with changes between Debian Wheezy and Jessie. I did not try to return to the former one. For the moment I’m fine with waiting, since the main issue for my application is that the date is always wrong. I can do all other things I intend to do with the current installation.