For the latest trip I once again used Android apps that make use of Openstreetmap data for offline Navigation. This included three uses: car navigation (routing), hiking support (display a prerecorded track), and finding POIs inside a small town. I used OsmAnd and Maps.me. In short, I prefer the former for hiking and the latter for car navigation. As with any other tool, both have strenghts and weaknesses.

Maps.me focusses on ease of use. Compared to OsmAnd, it is much faster calculating routes. It can also display tracks on top of the map, but only in kml format, not the popular gpx format. Like OsmAnd, it provides synthesized speech output for turn instructions. However, those alone are not reliable enough to reach the destination without deviations. A car mount for the handset is mandatory so that the driver can see the route on the display at crossings.

Unlike OsmAnd, Maps.me stops routing in case the display is switched off. This means the driver cannot switch off the display on highways when the next turn is far ahead. Not to talk about the ability to automatically switch on the display as soon a turn is approaching. That would be great when driving without daylight.

For car routing, Maps.me remains my favourite, mainly due to its overall ease of use.

OsmAnd feels like a swiss army knife. It can do almost anything one might expect of a mapping application. It features a highly configurable map with several overlays (SRTM contour lines, hillshading, POIs), can import and export tracklogs, supports car, bike, and pedestrian routing and can even warn when violating speed limits. Its routing engine can also cope with stopovers.

Over the years, it became more and more easy to use, despite its many features. On the other hand, those features require a certain amount of controls, while some features are well hidden in some sub menus (I detected one just a couple of days ago).

Its routing engine is rather slow and has difficulties coping with long distances. As a former MoNav developer, I really wonder why none of the routing apps seems to be aware its “realtime” routing engine, which is available for about 7 years now.

Due to its stopovers, I’m still struggling with basic routing like “Just route me back to my hotel.”. In the car mount, the display often is flickering a lot, the handset becomes rather hot and the battery tends draining. Where I love it is during hiking trips. Switch off the phone’s display, put the handset into the pocket and grab it at the next crossing. OsmAnd is still running, did continue to record the tracklog and immediately shows the current location. One can even add waypoints to the current tracklog (though it requires a couple of clicks). I simply love it for that purpose.

OsmAnd also warns about railroad and pedestrian crossings. The latter ones became rather annoying in case multiple of them follow each other. At leat OsmAnd should not announce the next before the first was passed. The current implementation made me mute the car’s hifi system completely.

I got the impression that the POIs in OsmAnd only contain POIs which are present as nodes in the openstreetmap data set. POIs that are mapped as polygons (e.g. shelters while hiking or churches) are not part of the POI set.

What happens is that both apps tend to say something like “turn left” or “turn slightly right” while driving on a road where no crossing exists at all. I observed this behaviour every now and then, e.g. excessively between this point and Echternach a couple of days ago. Checking the data didn’t show any abnormality, except that the street’s path contains some very short segements every now and then. 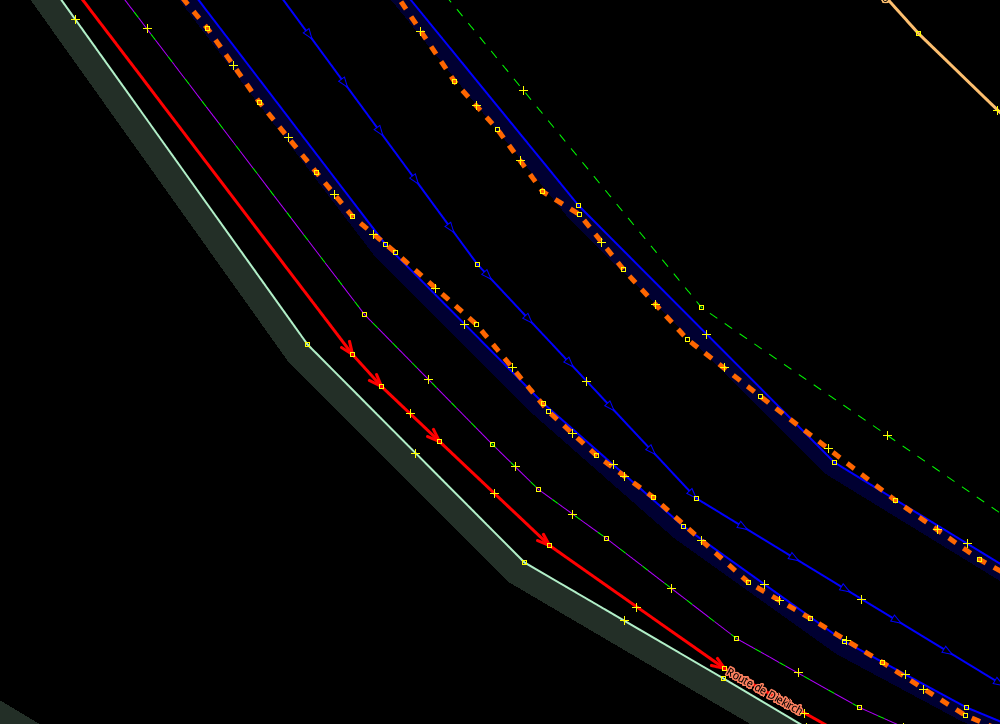 Maps.me also suffers from this issue. Today it two times told me “turn left” – in the middle of a highway bridge (like the Sauertalbrücke). A driver following such instructions should face the consequences :) . Unlike the aforementioned way, the bridge does not contain short segments, so I have no clue what actually is causing those mysterious turn instructions.