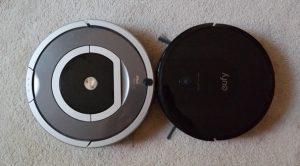 About six years ago I purchased an iRobot Roomba 780 vacuum cleaner. Since then, I have no clue how one can survive without such a gadget, despite the fact it was not a cheap investment at that time.

Recently I replaced it with a eufy RoboVac 11S max. There’s nothing wrong with the Roomba, but due to its age, more recent devices like the Robovac have some advantages:

The first runs of the Robovac look promising. What I observed is that it has difficulty entering its power dock. Sometimes it enters it perfectly, sometimes it approaches it angular and thus moves it a couple of centimeters. Possibly this is due to some nearby objects so the Robovac struggles to locate the dock properly. Maybe I’ll fix the dock to some mat to position it more stable.